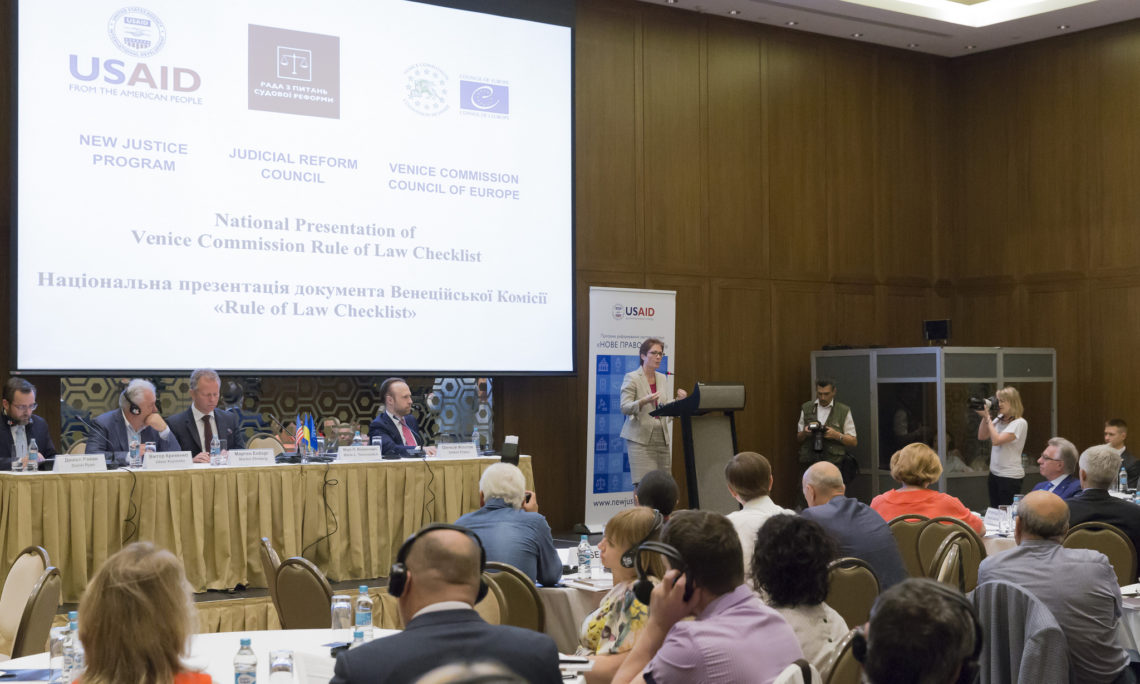 Good morning everybody, Mr. Buquicchio,Mr. Filatov, Mr. Kryvenko, Mr. Ehnberg, it’s such a pleasure to be here with you today, and distinguished guests. I’m really pleased you could come early on a Monday morning to join us here today to present the Rule of Law Checklist.

When I was thinking about this over the weekend and, you know, what would I say and, you know I had to sort of stop for a moment, cause I wasn’t exactly sure what a Rule of Law Checklist actually is. And, so reading through the introduction, what I love about it, because I am a practical person, I’m, you know, not somebody steeped in the law, as probably everybody else in this room is – I’m a practical person. And so, how do you connect the law, you know, the big concepts of rule of law, democracy, and human rights, into something that actually makes people’s lives better? And so I love the fact that you are going to be presenting here practical things to think about to help guide this process in – in Ukraine. Because, as I think everybody in this room recognizes, this is hard stuff. You know, I think about my own country, and we’re coming up on 231 years of – of independence, and trying to make our democracy a more perfect union. We’re still working on it, and we will working on it for another couple hundred years. So I’m really pleased that – that – to be here with all of you today.

So I want to, just kind of take you back about a year ago, I arrived in Ukraine last summer, and constitutional and legislative amendments had, with regard to Ukraine’s judiciary, had just been passed.

And, you know, I remember how, how hapy people were. I mean, there was really a feeling of elation — from high-level officials, to – to civil society activists and ordinary citizens. Including, I have to say, the American business community, but also, of course, local entrepreneurs, local – local businesses.

In the year since, I’ve had the good fortune to travel around this beautiful country and talk with many Ukrainians from all walks of life.

And in those conversations, you know, you always learn a lot. In those conversations, I have to be honest. There’s been a little bit of disappointment, a little feeling of resignation creeping in. People are starting to wonder whether things are really gonna change, and is Ukraine moving forward, or is it slipping back? And, you know, I’ve got to tell the people in this room, because you are the ones who are most – most involved in this process.

They are wondering about reforms in the justice sector. They are wondering whether it’s gonna be business as usual, or – or whether there is really going to be rule of law in – in Ukraine as the constitution forsees.

American investors and local folks have told me that, you know, they – they really thing twice, three times, four times, about investing in the Ukrainian economy, because there’s no legal certainty that their investments will be secure, their contracts will be upheld, or that intellectual property will be protected.

Ukrainians citizens tell me there is [pause] no protection from the law when disputes arise, whether related to real estate, taxes, unfair labor practices. There’s terrifying raider attacks, or other issues.

And I’m sure everybody in this room hears similar concerns.

And for this reason, judicial reforms must be implemented now. And I know that this is the group of people that’s making that happen.

Today, Ukraine has an opportunity to establish a Judiciary that truly meets the citizens’ demands for justice, equality before the law, an end to impunity for corruption, and above all, trust and confidence in the courts.

But getting there means more than just going through the motions. The reform process must be open and transparent, and the new judiciary that results must be both independent and of the highest integrity.

Ukraine now has at its disposal the expertise, the resources, and the tools to complete judicial reform. One such tool is this Rule of Law Checklist that would be presented today.

It’s – it’s a Checklist, it’s a start, but it can help move Ukraine towards its judicial reform goals in several [inaudible] ways:

It can be used to evaluate whether the selection of Supreme Court justices meets the highest standards of judicial independence and integrity. Reform is a massive job, and it is going to take years. We all understand that. But I can’t think of anything more important than selecting the right people to be the judges of Ukraine, for Ukraine in – in the future. It is the – the number one priority right now, and so there can’t afford to be any doubts about the selection of those justices, about their independence, about their integrity.

The Checklist can also measure whether citizens and civil society are fully engaged in the judicial process reform so that – judicial reform process – so that the judiciary actually meets the needs of all citizens, rich and poor, strong and weak.

It can determine whether all interested stakeholders are included in the process of creating the Anti-Corruption Court, another huge priority, and that the Court consists of qualified, ethical judges.

And [inaudible] Checklist can also be used to measure progress towards renewing the judicial corps through a competitive selection of judges at all levels.

So putting this Checklist into practice will not only deepen the understanding of the rule of law, but also allow us to see whether we are achieving the reforms that Ukrainians have called for repeatedly.

At the heart of these demands was a call for dignity, for fairness, that everybody live under one rule of law, whether it’s the people on this podium, or the poorest individuals in – in society, that we are all subject to the same law. And that’s what judicial reform is all about, that’s what judicial reform seeks to address. In closing, I just want to say that I am tremendously optimistic about Ukraine’s future. I – I think that this is a fabulous country, and the fact that all of you are here thinking about how to make rule of law and judicial reform a reality for Ukraine is really inspiring. So I really believe that now is the time to keep on moving forward in implementing judicial reforms so that bright Ukrainian future is realized.