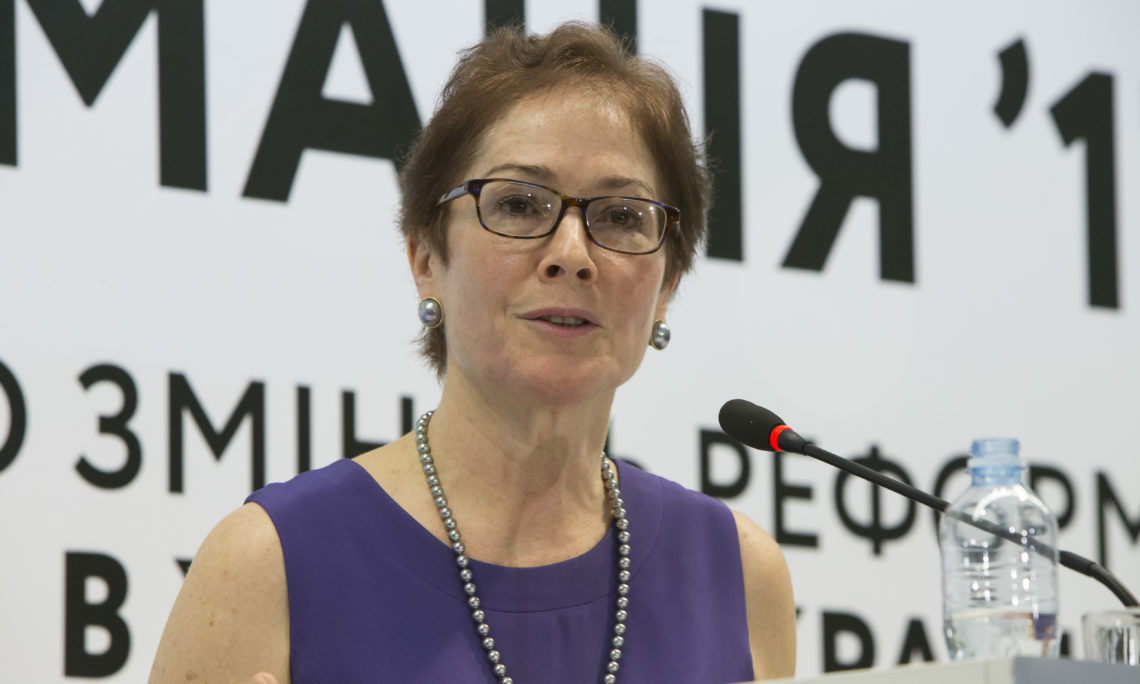 Good morning and thank you for inviting me to join you today.

I’d like to start by thanking the Prime Minister for articulating a really strong pro-reform agenda for Ukraine.  And I’d also like to thank Vox Ukraine and Borys Davydenko – this is a really important conference and that’s a really important question: what changes in life of Ukraine are reforms going to bring?

You all play a very important role in this.  I think we’re all here today because we believe that regional media plays a crucial role in communicating Ukraine’s reform efforts.  Journalists are not merely watchdogs, but what we call the ‘fourth estate’—after the executive branch, the legislative branch and the court system.  And in fact, Thomas Jefferson, a very famous President of the United States, our second President, famously said that if he had to choose between having a government [without press] or having the press [without government], he would always choose the press.  That’s how important your role is. You empower decision-making and you help people to understand difficult issues and difficult transitions.

So, in Ukraine, this means you need to clearly communicate about efforts to advance reform.

The good and the bad.  The pluses and the minuses.  The truth.

Some of you may know that I served in Kyiv once before, from 2001 to 2004.  And I can tell you very honestly, I am so impressed with the progress I’ve seen since 2004.  There have been a lot of changes.  And I see them every day when I walk my dog around the city – I see the art scene, I see incredible new independent businesses, and also the new and modern patrol police here that are about helping people rather than taking bribes.

But most of all I see a change in the Ukrainian people themselves.  When I was here before, people were great, they were working hard, they wanted Ukraine to have a government that was transparent and accountable.  But I think that, maybe, people, you know, in that 2001-2004 period didn’t actually always believe that would be possible here, in their lifetimes.  So, when I came back here in August 2016, about six months ago, I was pleasantly surprised by the changes in the Ukrainian people – in the expectations that the Ukrainian people now have of the government.  People expect accountability, they expect transparency, they expect results for the Ukrainian people, and they are willing to work to make it happen themselves.  And that’s what makes me optimistic about Ukraine.

Ukraine has always had huge potential, and I am seeing Ukraine starting to realize that potential, because of people like you.

That said, Ukraine is not there yet.  People not only want to build the new Ukraine, they want to be living in that Ukraine right now.  And getting there isn’t always easy and it’s not always as fast as people would like.

I will give an example of a very positive reform that, I think, has been very-very difficult, and that’s energy reform: charging market tariffs for gas.  It was the right decision, it was a very hard decision, and it’s not a popular decision.  It’s an issue of fairness, of why should the Ukrainian people pay more than big companies that may be politically connected, for their gas.  Is it right that those companies be subsidized?  And I think the answer is no.  It’s an issue of energy security.  That move has done as much as anything else to make Ukraine energy secure and independent of Russian gas sources.  And that’s an issue of Ukraine’s prosperity. Instead of the Ukrainian Government spending 7 per cent of Ukrainian GDP on gas subsidies for the politically connected, now the Government is collecting taxes from these companies.  And that benefits the Ukrainian people.  But it’s been hard, it’s been very unpopular, and it’s been a cold winter.  I see your role as explaining all of these things.  It doesn’t mean that people like it.  And maybe, people even disagree.  But putting it out there so that the average Ukrainian hears the facts, understands why decisions are being made, and then can make their own decisions as to whether this is the right way to go or not.

I’ll give you another example of a difficult reform, and that was the nationalization of PrivatBank.  It was the largest bank nationalization ever, anywhere, but it had to be done – the bank would go bankrupt.  And as you know, it was the biggest commercial bank here; people had their life savings there, they were using that bank for transactions – if it closed unexpectedly rather than in a controlled nationalization, the results for individuals, as well as the greater economy, would have been devastating.  Again, it was a hard decision, but it was the right decision.  And I think the Government deserves a lot of credit for this.  Because it’s the kind of reform that ensures long-term access to finance and credit for all Ukrainian customers and businesses.

Another important reform that the Government is championing is decentralization – pushing decision-making down to the local level, pushing budgets and budget decisions down to the local level.  It’s hard to imagine that somebody sitting in Kyiv would have a better idea of which particular road needs to be paved over first – that’s something that local people can decide.  And they can decide it openly and democratically after a discussion.

These are all necessary steps, but they take a long time to come to fruition and for everybody to see the full merit.  But these are the kinds of decisions that really create long-term positive effects for Ukraine’s citizens.  Because the best defense for Ukraine – the best way to defend your sovereignty and to defend against external threats like Russian aggression – is for Ukraine to be successful in its reform efforts.  For Ukraine to be a prosperous state, a democratic state with Western values – that is the best way to create a Ukraine that can maintain its sovereignty and independence.

It’s clear from the Maidan, it’s clear in the three years since, that Ukraine needs to reform and Ukraine is reforming, perhaps, not as quickly or in exactly the manner that people had imagined.  I think, often the average Ukrainian – somebody’s grandmother, somebody’s best friend who isn’t watching the politics the way all of you do – might not necessarily understand what is happening and the steps that have been taken and are being taken.  Is the Government getting out its message about reforms taking place?  Are people hearing it?  Are they really understanding it?

I would challenge everybody in this room that as Ukraine’s thought leaders and as the influencers of the Ukrainian public, it is your duty as citizens of Ukraine, as professionals in the media sphere, to inform and to educate the Ukrainian public.  To make people understand.

I’d like to tell you about some of the efforts that we have supported.

In recent months, over 100,000 officials have submitted electronic declarations of their assets and income which is a really big step forward for transparency in government. I can see some skeptical looks out there.  Implementation is important too.  For the NAPC to follow up in terms of what looks anomalous.  And again, I would suggest that this is a process.  And we are proud that we were able to help provide support to grassroots efforts to make the electronic declaration law possible.

Transparency is really important, so are active anti-corruption efforts, and working with Ukrainian partners in the Ukrainian Government, we also supported of the three new anti-corruption institutions.  As well as the judicial reforms that the Prime Minister spoke about.  For example, by helping with the establishment of new competitive procedures to select judges, including for the Supreme Court, which is an ongoing process right now.

We’ve also worked with the Ministry of Internal Affairs to help establish, train, and equip an entirely new first-responder police force. 12,000 new patrol police officers are now operating in every oblast of Ukraine, including Donetsk and Luhansk. And roughly 20 percent of that force is female – a first for Ukraine, very impressive globally, and something that I think is really-really important!

These are all just first steps.  It’s only been three years.  I know, a lot of people think that’s a long time, but in the span of history three years is not a long time, and reform does take time.

We are looking forward.  We are proud to be able to support some of the reforms that are on the agenda, such as pension reform, land reform, privatization, establishing good governance structures for state-owned enterprise.  These are the big structural changes.  And because small programs are also very effective, we support reformers from throughout civil society.  On all sorts of different issues – it could be educational, it could be public health reforms, it could be de-centralization. And we do it via small grants.  Anybody in this room can go to our website, if you have a great idea, and you can see whether, maybe, there might be a way to partner with us through a small grant.  I would say small grants do great things, including helping to sponsor this conference!

So, in conclusion, I would just say that this is a time of change – not just in Ukraine, but all over the world.  Political change, economic change – there is a lot going on, and there is a lot of noise out there.  But people are watching closely to see what happens in Ukraine. It matters for you, it also matters for us.

I would say seize this opportunity.  Make the difficult choices that will build Ukraine.  And be part of the forward momentum.  Advocate for change in opinion pieces.  Sometimes it’s easier to be cynical.  But I would recall that Simon Perez’s quotation that the Prime Minister referred to.  And I would quote another man, a former boss of mine, Secretary of State Colin Powell.  Who would always tell us: optimism is a force multiplier.  If you think it can happen, it can.  If you think it’s never going to happen, it’s not going to.  So, can I appeal to you to advocate for change in the opinion pieces, explain changes in news articles, in the straight factual pieces, put out those facts, so people can decide for themselves.   And, perhaps, most important, always hold public officials, and yourselves, accountable.

Just as you have a job to inform the Ukrainian people, I have a job to inform my Government about what’s going on here. Tomorrow, I’m on my way to Washington to let people know about all the important things that are happening here.  But I am looking forward to coming back in about a week and reading all of the articles that you are going to be writing about the changes in Ukraine and why they are important, or perhaps, why they are the wrong ones – whatever you believe – but I really encourage you to get out there and advocate.