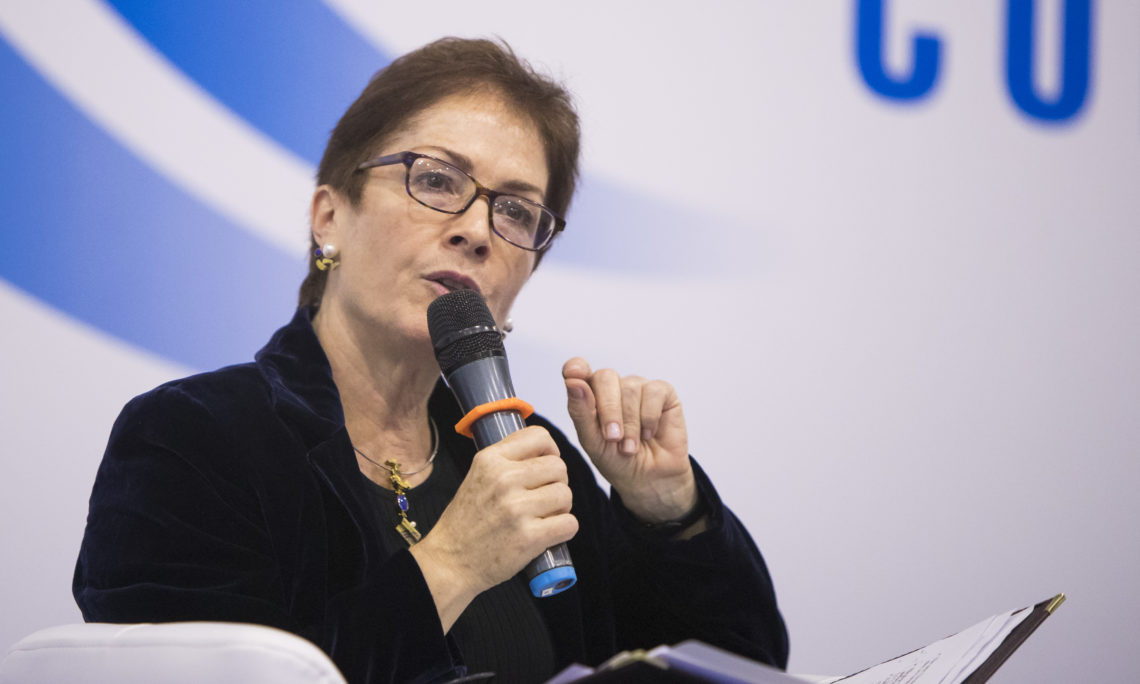 Hello, everybody. I’d like to welcome everybody and I really want to thank you, Andriy, and Naftogaz for inviting me to speak today because I think all of us understand, or we wouldn’t be in this room, how crucial the oil and gas sector is for Ukraine’s long-term welfare.

And that’s why energy reform is such a key component of the new Ukraine that the Ukrainian people created in 2014 on the Maidan.

From our perspective, the new Ukraine needs an open and transparent energy market, not one dominated by a few select individuals.

The new Ukraine seeks energy security and refuses to allow other counties to use energy to put security – the security of the Ukrainian people – at risk.

And the new Ukraine measures progress on reforms by how they are implemented, not just as decisions on paper.

And back in 2014, the new Ukraine understood that Ukraine, that Naftogaz was a priority for reform as it represented – and I have to apologize for this pun – a fuel tank for corruption. If Naftogaz could change, the Ukrainian people and frankly the world would understand that Ukraine was committed to a new way of doing business: efficient, effective, transparent.

Working together, the government and Naftogaz embarked on a very difficult path to strengthen corporate governance while reducing graft and corruption. The results were impressive, and I think bear repeating even though I think many of you know some of this.

Naftogaz went from receiving upwards of 7% of Ukraine’s GDP in subsidies to being a net contributor to the budget in 2016. Against all expectations, Naftogaz won the arbitration gas supply case against Gazprom this May, in Stockholm. This saved Ukraine $44 billion, or nearly half of Ukraine’s annual GDP. I mean, this is an incredible achievement. And Naftogaz played a key role in reorienting Ukraine’s gas imports so that Ukraine no longer needs to import directly from Russia and in fact no longer does.

It is a remarkable story that few would have believed possible in 2014. And that’s, you know, really only three years ago.

As I speak with you today, however, many believe that Ukraine is at a crossroads. And they ask: will Ukraine continue to move forward with reforms, or will reforms slowly unravel?

And because Naftogaz is the lynchpin of the gas sector – a sector at the center of the Ukrainian economy – as well as a symbol of successful reform in the new Ukraine, everyone is watching to see what will happen with Naftogaz.

We can see that the extension of the Public Service Obligation for Naftogaz to supply gas at regulated prices continues to create opportunities for corruption that benefit a few Ukrainians at the expense of the majority.

We are concerned that by not adjusting gas tariffs to market levels in accordance with an apolitical formula previously agreed upon with the IMF, the gas sector remains open to manipulation.

We all understand that the unbundling of Naftogaz, a difficult process that requires a strong commitment to reform, needs to move forward.

We hear concerns that the recent resignations in September of the remaining independent Naftogaz supervisory board members reflected their frustration with stalled corporate governance reforms.

And it’s reassuring to us that in the wake of these resignations, the Prime Minister has consistently reaffirmed his commitment to reforms in the gas sector and his recognition of the need for a qualified and independent Naftogaz supervisory board to ensure progress. Such a constructive approach is positive, and we look forward to welcoming that new board very soon.

Good corporate governance is key to running any successful, transparent corporation, especially one that is as systemically vital to Ukraine as Naftogaz. Therefore, it is important that the government or shareholder, the Naftogaz board and Naftogaz management work seamlessly together according to the best corporate governance standards.

American energy services and production companies are ready to provide much needed technology to help Ukraine increase its gas production. They’re looking for partners that are run transparently. They need a level playing field in order to contribute and compete.

The companies, however, are encountering obstacles. Licensing procedures remain opaque, making it difficult to engage. And we believe that Naftogaz could do more to open its gas fields to domestic and foreign investments.

Several weeks ago, President Trump told President Poroshenko in New York that American companies see great potential in Ukraine. I think we all do. We want to see that potential turn into a reality.

I hope that the Ukrainian government and Naftogaz can show that Ukraine is indeed open for business and ready to open its doors to investment. Reforming the energy sector and Naftogaz will not only help Ukraine domestically, but regionally as well.

Reforms will help prove Ukraine remains a reliable gas transit country and help stop the potential construction of the Nord Stream 2 pipeline project. Nord Stream 2 would decrease gas transit through Ukraine and cost Ukraine up to $2.7 billion in lost revenues, or almost 3% of GDP every year. Without gas transit, reverse flows would stop.

Let me be clear: No country should be able to use energy to put political pressure on Ukraine or to put Ukraine’s security at risk. But let me also be clear that Ukraine needs to do its part as well.

Energy and the reform of Ukraine’s largest state-owned enterprise are the keys to securing economic and political sovereignty, safeguarding the well-being of all of the people, and continuing on Ukraine’s path to Europe.

The U.S. will help, will try to help you achieve those goals with the start of a new $90 million energy sector reform program that is set to start in the very near future.

This is a program that we hope will further strengthen Ukraine’s energy security by ensuring compliance with European energy standards and greater connectivity with Europe. The program will help establish competitive markets in energy sectors, improve renewable energy generation, and enhance private-public dialogue on energy.

Now is the time for Ukraine to recommit itself to energy reform, take on the vested interests in the sector, and turn reform plans into reality.

As Ukraine rejects the ways of the old and moves forward with reforms, the U.S. stands with Ukraine. We want to help Ukraine develop a thriving, dynamic, and transparent energy sector that heats the home of every citizen reliably and provides security for the country at large.

So I thank you for your attention and look forward to the rest of the conference.