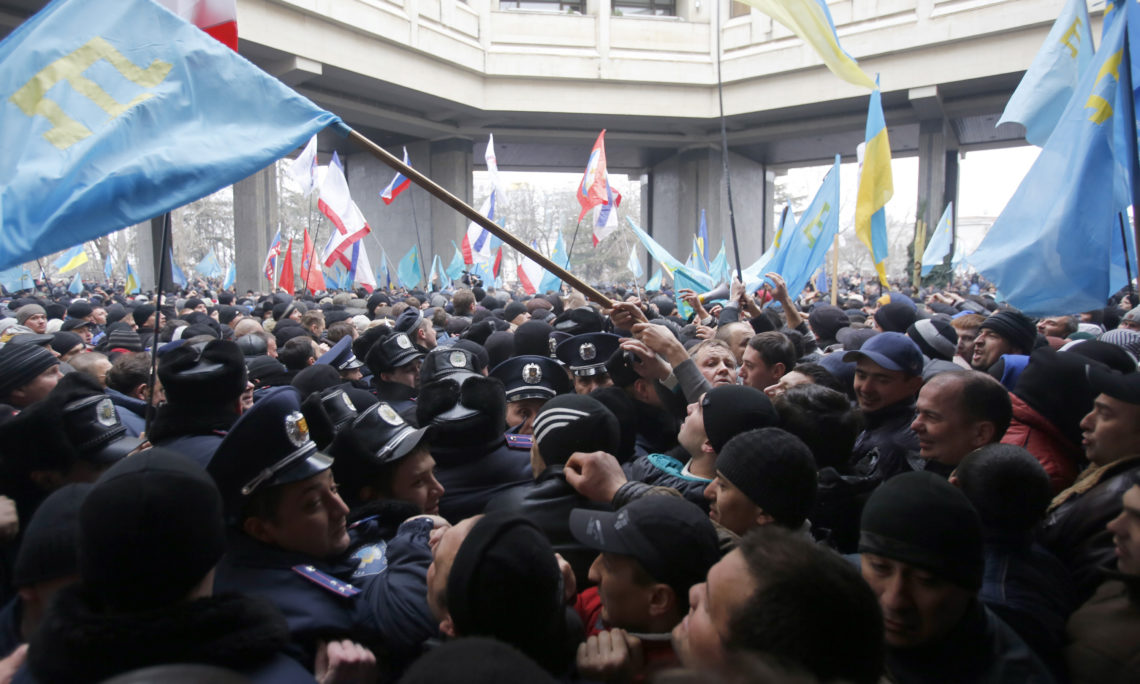 Good morning everybody. It’s really an honor to be here at the fourth international forum on the de-occupation of Crimea.

I am pleased be here, although, I think like all speaking here today I am sorry that it’s under circumstances.

Four years after Russian forces took over the Crimean Rada, forums like this, however, are crucial to ensuring that Crimea remains in the public discourse.

So that Crimea remains on the agenda.

The United States has not, and will not, forget Crimea.

U.S. Secretary of State Tillerson said in December: “We will never accept Russia’s occupation and attempted annexation of Crimea. Crimea-related sanctions will remain in place until Russia returns full control of the peninsula to Ukraine.”

And just last week, Deputy Assistant Secretary of State Sullivan, who was here in Kyiv, reiterated this point.

He said: “Given the high stakes, it’s important to be clear about U.S. policy towards the conflict. Crimea is Ukraine.”

But where does this leave us?

Fundamental human rights have been under attack for four years now.

Russian security services have engaged in an intense and invasive campaign of intimidation to suppress dissent and stifle opposition to the occupation.

We viewed with particular concern the treatment of the over 100 individuals who participated in individual protests against Russian persecution on October 14.

These courageous individuals protested alone, they protested peacefully, to stand up for their rights and those of their neighbors and community.

And since then they have faced administrative fines, detention, and heightened harassment.

These so-called authorities have raided Crimean Tatar homes, mosques, and schools, and imposed administrative fines and other penalties on witnesses who gathered to document them.

I think, when Rebecca [Harms] was speaking earlier, she said the same thing, when she said “if we can’t help Crimean Tatars, we can’t help ourselves.”

The injustice that Crimeans face today is antithetical to the values and norms we, as society, must adhere to.

Without a shared set of values and rules of behavior, we are all under threat.

Russia’s violation of Ukraine’s territorial integrity and the human rights of Ukrainian citizens is a threat not just to Ukraine, but to the international community.

The United States has worked to raise awareness about abuses in Crimea through international fora such as the United Nations and the OSCE.

And Special Representative for Ukraine Negotiations Volker has continued to emphasize that progress in Crimea is crucial and no less important on the international stage than progress in Donbas.

Our position is clear: Crimea is Ukraine, and Crimea-related sanctions will remain in place until Russia returns full control of the Crimean peninsula to Ukraine.

But it is critical that the international community continue to coordinate our efforts on Crimea, and indeed to increase them.

As Mr. Chubarov has said, we may not have been successful yet in a way we would like to be, but we need to keep on working on that and we need to work on this together. Because we are stronger when working in tandem.

We look forward to continuing our cooperation with Ukraine and other international partners.

And we will do so until Ukraine’s territorial integrity is restored, and Crimeans can live without fear of persecution for their background or beliefs.