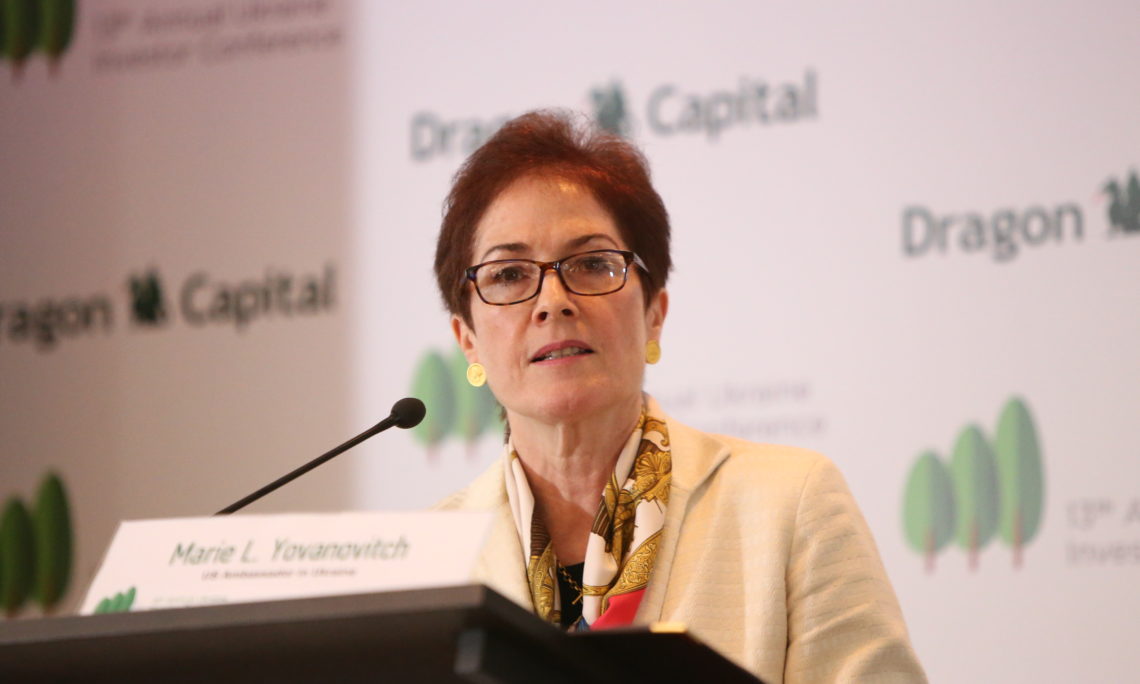 When I agreed to come here and address you all, I didn’t realize that I would be in the very dangerous after-lunch slot. So, I am going to do my best to sort of entertain all of you and keep your attention.

I want to thank Thomas and the Dragon Capital team, for inviting me here today and for organizing what I think is a very interesting conference. I know that everybody here today shares an interest in supporting reforms that will continue building a strong Ukraine to host a thriving business and investment community.

Making the choice to undertake and then actually to stick with tough reforms is difficult.

The desire and the energy for reform needs to come from a lot of different places. From some of the people up here on the panel – leaders in government, but also leaders in society, and in the business community, and I’d also add, in the investment community. All of you have something that Ukraine needs and lacks. So, you have a tremendously important role to play in this process. This next panel is going to consider Ukraine’s reform and geopolitical choice. I think all of us can agree that the Ukrainian people, and the government they have elected to represent them, have made a clear choice to embrace European values and re-orient themselves toward the west. But making the choice and then making it happen are two different things. It’s an ongoing process, it’s hard, it takes time, and frankly, in any country in the world, it gets harder over time.

Moreover, I think, the inherent nature of any reform process is that all of us tend to pocket accomplishments and forget where we come from, and then we focus on the next thing. So let me take you back to 2014.

Many of course were here in 2014. In 2014, and through 2015, the Ukrainian economy, quite bluntly, was one of the worst performers in the world. The Yanukovych regime had fled with millions – probably billions – of dollars of public money, and completely neglected the macroeconomic management and long-term investment that Ukraine needed to grow and thrive.

Thanks to sound economic management of the government and a strong partnership with the international community, today Ukraine is a country whose GDP is growing, with a stable currency and reasonable inflation. Reserves are at their highest level in years.

It’s remarkable that while simultaneously responding to military aggression in Crimea and in eastern Ukraine, the government handled a dire economic situation more decisively than any previous government.

One example of these tough but necessary reforms is in the energy sector: charging market tariffs for gas was a tough decision, and not a popular one, especially over a cold winter.

However, it is making Ukraine more secure, more independent, and more prosperous. Who would have thought three years ago that Ukrainians would not import any gas from Russia – no gas from Russia was imported in 2016. Or that Naftogaz, instead of sucking up 7% of GDP in subsidies, would actually pay 60 billion hryvnia a year in taxes to the government ? That’s a real difference.

Last year, the Ukrainian government also launched an important transparency reform with the decision to require public servants to declare all of their assets.

It is certainly uncomfortable. As somebody who has to do this in my own country, I understand how uncomfortable that makes people. And this is a very,very thorough process. But it’s that kind of transparency and accountability that is really important now for the Ukrainian people andthat sets a positive tone for those looking to invest in Ukraine. And anecdotally, we hear reports that it’s already changing behavior – not everyone’s behavior by a long shot –but the behavior of some – and that is how change starts.

In December, the government undertook the nationalization of PrivatBank. Many of you may have followed that. It was a very complex process – and I think saying it was complex probably understates the complexity, because it was the largest nationalization anywhere, ever.

In the banking sector, the NBU closed over 80 troubled banks, ensuring long-term access to finance and credit for all Ukrainian customers and businesses.

National Bank Governor is gone today, but probably deserves the lion’s share of the credit for all of the changes in the banking sector. And I hear that you gave her a very well-deserved ovation this morning. I probably speak for everybody saying that I think we are going to miss her in her capacity as National Bank Governor. But perhaps also I’ll speak for many of you in the room when I say that we believe it is important that her eventual successor be a competent, experienced manager who operates free from political influence. These are really important principles. And I urge all of you to make your views known on that score.

Although all these reforms were challenging to enact and continue to be challenging to implement, they were all necessary steps that will have lasting positive effects for Ukraine’s citizens and important signals to the market. But much work remains to be done, as I think we all know. It is vital, as my EU counterpart noted this morning, that Ukraine keep pushing forward on reform. Many of the most important reforms are in the area of anti-corruption.

In the immediate term, it is important that the GoU ensure the audit of the National Anti-Corruption Bureau (NABU) is performed in an independent, credible, and transparent manner.

Key to this will be appointing a commission that has the requisite technical expertise, confidence of the public, and independence from political interference.

We also believe that it is crucial that Ukraine successfully investigate and prosecute officials based on information contained in asset declarations.  Such a process should be credible; it should be transparent, and again free from political interference, and commensurate with the obvious discrepancy between assets and salary where that occurs.

Along with many of you, we are closely following the judicial proceedings against State Fiscal Service chief Roman Nasirov. It is absolutely imperative that this investigation and subsequent trial are conducted to the highest standards. This is critical, I think, for the credibility of Ukraine, as well as the institutions that are working on this issue.

Looking ahead to the next few months, we urge the Rada to pass legislation creating a specialized anti-corruption court. It will also be important to establish independent wiretapping capability for NABU.

The Government has also committed to passing comprehensive pension reform to ensure the system’s solvency and human scale to ensure that payments that people are actually payments that would make a difference in their day-to-day lives. Right now, the payments are so small that they really don’t. And I think that’s one of the purposes for the reforms. We look forward to the next steps on what is a really important initiative.

Ukraine’s leadership also recognizes the importance of unlocking the enormous potential of one of Ukraine’s greatest and more culturally important resources – its land. Rules need to be developed by which land can be bought and sold, so it can be monetized to the advantage of people who own the land. This measure would critically transform the lives of Ukraine’s millions of small landholders and it would also really jump-start the agricultural sector.

State-owned enterprises are another crucial area where economic reform is necessary. The successfully privatization of at least one large SOE as soon as possible would demonstrate to the business community and the investment community that Ukraine is serious about privatization. We all know that a successful privatization would unlock many doors and spur the economy.

This week’s Cabinet of Ministers resolution instituting standards of corporate governance at Ukraine’s largest SOEs was a very positive step, and we look forward to their implementation.

Finally, I’d like to highlight the U.S. advocacy regarding protection of intellectual property which is the top concern – when asked what are the concerns for U.S. traders, the top concern for U.S. trading partners – and I know for many others as well, including Ukrainians – is intellectual property rights. We are committed to helping improve Ukraine’s ability and desire to protect the intellectual property rights of all creators. Just last week, a Ukrainian government representative participated in hearings in Washington on Ukraine’s rating in the U.S. Government’s annual “Special 301” report, which will be issued in the coming weeks. The Ukrainian Government has acknowledged that more work needs to be done in the near term. So we are certainly looking forward to that.

We strongly believe that the best defense for Ukraine – against the external aggression that threatens Ukraine’s sovereignty and territorial integrity and the internal corruption through entrenched interests that sucks Ukrainian prosperity, democracy, and independence – is continued reform success.

This is the best way for Ukraine to show the world that it is committed to taking the steps necessary to be a prosperous and independent state rooted in democratic and Western values.

The U.S. supports further reforms that will make Ukraine strong and a strong partner for the United States.

As Ukraine’s business and investment leaders, I know that you have a vital voice in pushing for tough reforms, and I challenge you to continue pressing the Government and spreading the word to the public about the reforms that are still needed.

We are living in a time of political and economic change – not just in Ukraine, but across the world – and Ukraine has to seize the opportunity to stand out above the rest. The best way to do that is for Ukraine to keep on pushing forward on its chosen pro-reform path.

In closing, I’d like to thank all of you, but I’d also like to urge you to continue finding opportunities to support Ukraine by highlighting the successes to date and advocating for those additional reforms that may be painful, but are ultimately necessary.

I’d also like to note that I am optimistic about Ukraine’s future. There is tremendous potential here, and I believe that all of you must see it, or else you wouldn’t be in this room today. But that potential needs to be realized. I think it’s going to happen because of the Ukrainian people. The single biggest change that I’ve seen since I returned in August of 2016 – I lived and worked here from 2001 to 2004; I left in July before the Orange Revolution – the biggest single change that I’ve seen is in the people of Ukraine. When I was here before, people, I think, genuinely wanted to have a government that was accountable, transparent, brought results that are good for the Ukrainian people. But I think sometimes there was a doubt as to whether or not that was truly possible in the short term, in their lifetime. But when I came back in August of 2016, it was clear that people knew it was possible, they expected it, and they were working to make it happen.

I’ve met many individuals who have left lucrative jobs in the private sector – some of them are on this panel and perhaps some of them used to work for you – to work for the government in order to make that change. Others are pushing for change in private sector. So, not only do people think it’s possible that what the people on the Maidan said they wanted: transparency, accountability, results – they are working to make it happen. I find that to be really impressive, and frankly very inspiring. That’s what makes me confident about Ukraine’s long-term future, and I hope it makes all of you confident as well.

I thank you for being here today and I wish you a lot of success for the rest of your conference.