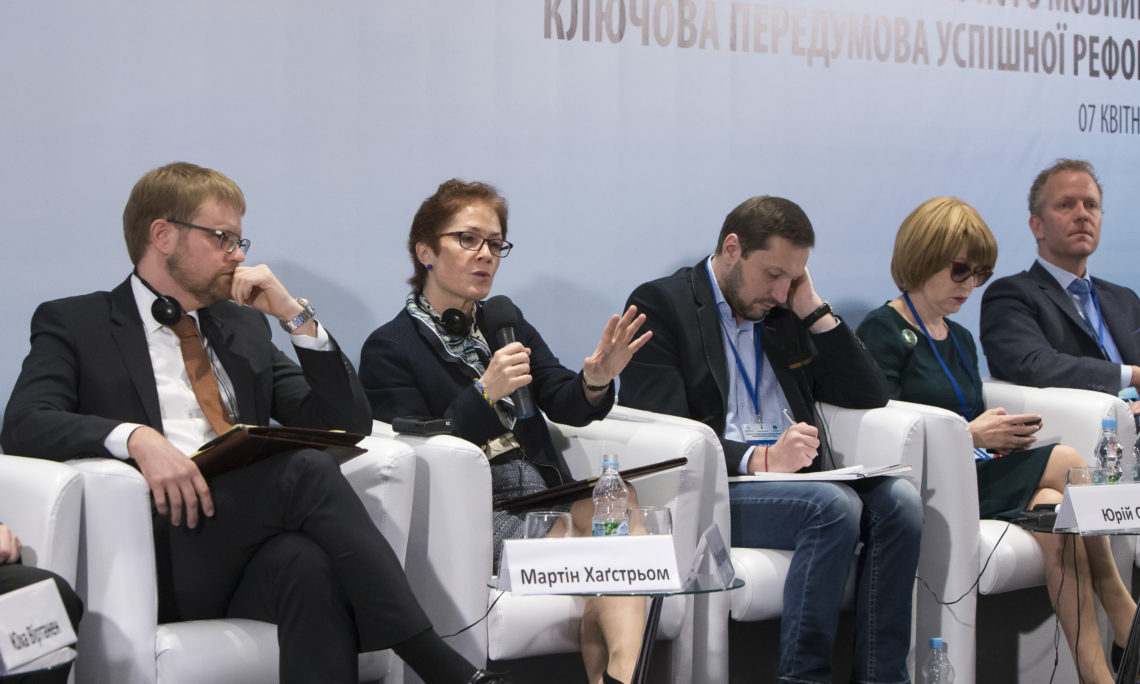 Question from Moderator:  Why is independent public broadcasting important for Ukraine?

Thanks for that question. I think that’s an important question. Because a Public Broadcasting Service is, as basically everyone here has already intimated, it’s important not just for Ukraine, but it’s important for every democracy.  For all the reasons that everybody has said:  access to independent information is absolutely key to democracies, especially in fledgling democracies like Ukraine.  And I think an independent public broadcast service can help to make that a reality, because independent broadcasters are, by definition, free from inference, they’re insulated from pressure, and they work for the public. They work for the Ukrainian citizen. And well-run public broadcasters are trusted to provide reliable news. And just to keep what Marten said, I think that’s exactly right – whether you call it the hybrid war, disinformation, fake news; it’s more important than ever that Ukraine have a reliable and independent broadcast service.

Mr. Stets said that, you know, this is a crazy project.  And maybe it is, but I would actually say that in the global environment today, it would be crazier not to do something like this, because what I think every democracy needs is this kind of independent service. So, Ukraine is now at a critical moment in transforming the first national channel from state broadcaster to a trusted public broadcaster.

You’ve got the legal framework, as had been said, and supervisory governing board, and that’s really important.  And you’re about to select the head of the management board, and how this happens is really important. It may be a technicality, or some may interpret as a technicality, but I think that in democracies process is very important. Process, a good process, a transparent process, a process where stakeholders are consulted, increases the likelihood that the results are going to be good. And it increases the results that even if I or somebody in the audience disagrees with the result, that they are still going to honor it and trust it because they saw a good process. There was a result, maybe I don’t agree with it, but I’m going to honor it and uphold it because I can see that it was a process and it was the will of the majority and it was not done under pressure. So, again, I would say that the issue of process, the trust that it engenders amongst stakeholders and the public, is absolutely vital.

So, I would urge to run the selection process in accordance with Ukrainian law, so that’s going to be a public candidate chosen.  And whoever that person is, that person and, I think, members of the board themselves need to be independent, they need to be capable, and they need to be open and willing to listen to viewpoints from all sectors of Ukrainian society. And most importantly, I think the management board should be committed to the principles of good journalism, objectivity, balance, and honesty. So, I want to say, I really appreciate the assurances that Minister Stets and others have provided about the process, and that good process is going to be followed.

I think you can see by this lineup here that this is an issue that obviously matters to the Ukrainian people. I think it also matters internationally. We think this is really important for all of the reasons that have been outlined by my fellow panelists and the ones to come. We in the U.S. are proud that we’ve been supporting this process for a while through helping draft the law and through content, and look forward to continuing that process. So, we are going to leave it at that and just thank COE for organizing this conference. We think this is a really important issue, and critical one.  Thank you.