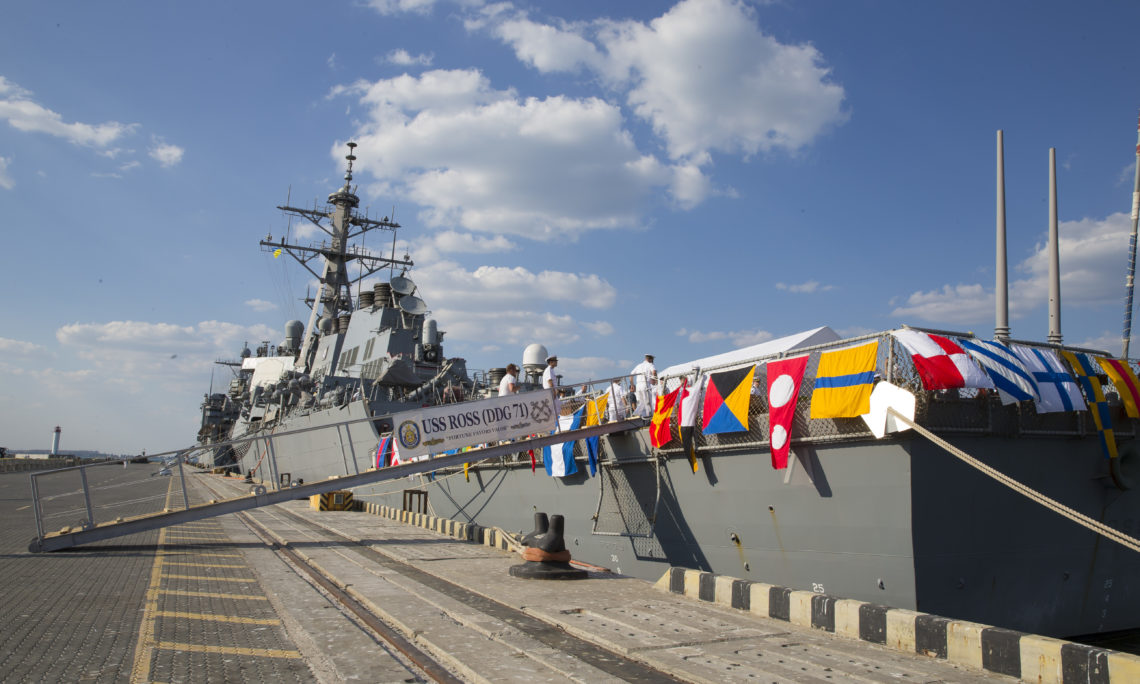 AMBASSADOR PYATT:  Thank you very much, Commander Caldwell.  I want to begin by offering a huge shout out and thank you to the Sailors and Marines who are here in Odesa today as part of our support for the Sea Breeze exercise.  This is one of the most complicated exercises that we have ever conducted in Ukraine, and it is an important manifestation of a commitment of my government to work with our partners in the Ukrainian Navy and to continue our effort to build the capacity of Ukraine to defend its own sovereign territory.

This is probably the last speech I will give in Odesa.  I was trying to think, what is the one message that I want to leave with our partners in this important part of Ukraine?  And I think it’s very simple: it’s trust in yourselves and lean on the confidence you have earned through the courage and resolve that you have demonstrated over the past two and a half years of conflict with Russia.  I’m delighted that we have Nadiya Savchenko here this evening as a representative, and WHO really is a representative of thousands of Ukrainians who have gone beyond themselves in demonstrating the resolve of this country to defend its sovereignty, territorial integrity, and independence.

I also want to offer a few other thank yous.  First, to Governor Saakashvili who is here with us this evening and who obviously arranged the spectacular weather to host the U.S. Navy.  But also Admiral O’Connor who is here as the Deputy Commanding Officer of the Sixth Fleet and these are all his Sailors and Marines.  So thank you, Admiral, for what you and your team are doing here to support our mission here in Ukraine.  And finally, I want to offer a huge thank you to Admiral Voronchenko and all of our partners from the Ukrainian Navy.

I was this morning with Minister of Defense Poltorak, who was hoping to be with us this evening, but he had to rush back to Kyiv.  And he shared with me that, yesterday, six Ukrainian soldiers were killed in the ATO, and something like 13 were injured, which is a reminder that Ukraine remains a country at war.  And there are soldiers who are every day asked to make the ultimate sacrifice in defense of their country.  The objective of exercises like Sea Breeze is to help raise the capacity of the Ukrainian forces and all of our international partners.  But it’s also to build the ties between us.  In a couple of days, this ship, the Ross, and the Sahaidachny will conduct at-sea aviation exercises.  And the Sikorsky helicopter which is attached to the Ross, which lands about where the Lvivske beer is, under the tent here, will fly over to the Sahaidachny.  And the KA-27, the Kamov, that came off from the Sahaidachny will come over and land on the Ross.  It’s a wonderful symbol of the partnership between our two countries and the scales skills and excellence of our sailors.

So I want to thank everybody for coming to be with us this evening.  On behalf of Mary and myself, thank you to the people of Odesa who have been such warm hosts over many, many visits to this beautiful city.  And I will conclude simply by expressing the enormous pride that I feel as an American for the partnership that we have been able to forge with some very courageous and very resolved Ukrainian patriots.  You have dealt with the worst that Russia can throw at you and I know you are going to prevail.