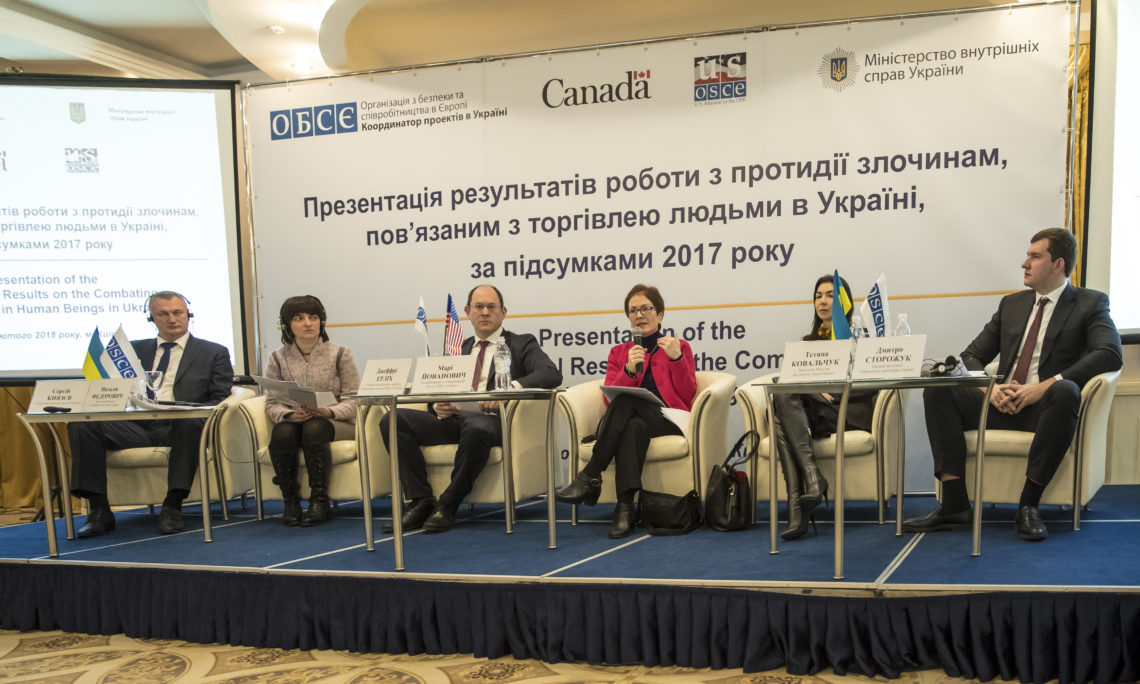 To all of my colleagues who are here today – I really thank you all for the chance to be here with you today to take stock of the past year’s efforts to combat Trafficking in Persons.

As you know, trafficking is modern-day slavery and it’s a global problem. It’s a problem here in Ukraine, but it’s a problem everywhere in the world affecting vast numbers of people. Defeating it calls for very close cooperation between a great variety of public and private actors, often across borders.

So I thank everybody who is here today, again, for your personal commitment and dedication to Ukraine’s anti-trafficking efforts.

And I’d also liked to thank especially the people who are here from the media today. Because, I think, whether it’s a formal public awareness campaign, or it’s just informal – neighbors talking to each other about the real dangers of trafficking, or whether somebody catches a little bit of information on the news because all of you are covering this today – I think public awareness of this problem is absolutely critical in order to get a handle on it and stamp it out.

I also want to thank some people who are not here today. Because for a trafficking victim it also requires that all of us demonstrate compassion and understanding. We need to help them regain a sense of dignity.  For those of us who’ve talked to trafficking victims, there is often a sense of shame – how could they have fallen into this trap.  But I think that those of us here today recognize that this is something that could happen to anybody, including close personal friend or relative. So, again, it’s so important that we redouble our efforts to stamp out this problem.

And of course, [thank] our friends in law-enforcements and the procuracy and others who helped ensure that traffickers are brought to account and that people are protected.

Your work, and that of National Referral Mechanism partners including NGOs and International Organizations, moved Ukraine forward a great deal over the past year, including on the U.S. TIP Report, as has been noted, but really most importantly, the reason this is critical – all this work –  is that it helped more Ukrainian citizens than in past years.  At the end of the day, that’s what it’s about.

And so, I am going to go through some numbers for you.  In 2017 the Ministry of Social Policy granted victim status to almost twice the number of individuals as it did in 2016.  A 195 people were granted this status vs. 103.

The National Police tripled the number of trafficking-related investigations under article 149 as compared to 2016 (342 vs. 112).

The Prosecutor General’s office more than doubled the number of indictments sent to court in 2017 (125 vs. 59) identifying 87 accused individuals (compared with 33 in 2016).

The National Police created an analytic department and created a department to address criminal labor-related abuses abroad, to assist in investigating of trafficking related crimes, and is dedicating the time of several investigators specifically to aid the counter-trafficking unit.

The State Migration Service launched a new online database updated daily, and containing records of over 950,000 invalid documents to verify passport validity.  I can’t stress how important that is.

Over the past year, Ukraine’s government has focused much attention on helping citizens who faced abuse at the hands of traffickers.  And it has steady allies in the form of civil society and international organizations.

Your cooperation with civil society organizations has had a most direct impact on human lives.  I will give you one example.  NGO lawyers here in Ukraine translated Brazilian law codes, contributed to an unprecedented outcome for two trafficking victims who were  jailed in Brazil on drug charges, setting them free, and bringing them home.

This case shows what can be accomplished when everyone comes together to do their utmost to help.  And it also shows just how hard, how labor intensive doing that is, and how worthwhile the outcome.

Over the past year, government and civil society have made crucial steps towards improving the national counter-trafficking. Although, I don’t want to minimize the challenges.  Profound challenges remain, – whether it on resourcing, whether it’s on the way we set up to do business, whether it’s on other priorities. But such cooperation among all of the key stakeholders can enable Ukraine to overcome these challenges.  Not only this is important, it’s absolutely vital.

The fundamental challenge is that if there is a breakdown anywhere along the line – failures of protection, victim services, prosecutions – traffickers win.  So, it’s important to overcome these issues with your dedication and attention, especially to the most problematic areas.

The efforts of the National Police and prosecutors have been tremendous over the past year, yet we need to say that courts convicted actually only 23 persons on trafficking offences in 2017, and of those 23 only seven went to jail.

If we compare that with rape statistics here in Ukraine, of 67 people convicted 57 were incarcerated.  That’s a much higher rate of incarceration.

For us, and I think probably for everybody in this room it is really disturbing that traffickers, even if convicted are unlikely to go to jail. This is without a doubt an area where Ukraine must do significantly better, and where attention will be increasingly focused over the next year.

We all want a Ukraine where citizens trust law enforcement enough to give it the tools it needs to do its job without fear of abuse.

On the important issues of prevention and victim identification, lifting the moratorium on unscheduled business inspections would be incredibly helpful.  I know that the Cabinet right now is seeking to lift the moratorium and that the Rada passed an exception to it in cases of credible information about abuses.

And on protecting the vulnerable – the issue of victim services – we have heard a great deal at the local level about uncertainty about which organization, which agencies, what level of government  will  have the responsibility in newly amalgamated communities and how this will relate to oblast level responsibilities.

Officials and NGO partners need clarity for which organization is ultimately responsible for decisions regarding provision of key social services, including identifying, referring and assisting victims.

These challenges will require continued attention.  I know that everyone here wants to see Ukraine become a real model for anti-trafficking efforts.  .

We certainly want to see the same thing And the United States will continue to support Ukraine in this important goal.

Again, thank you so for the opportunity to be here, and I want to thank you for the hard work and the really significant results in 2017.  And we are all looking forward to seeing even greater results in 2018.