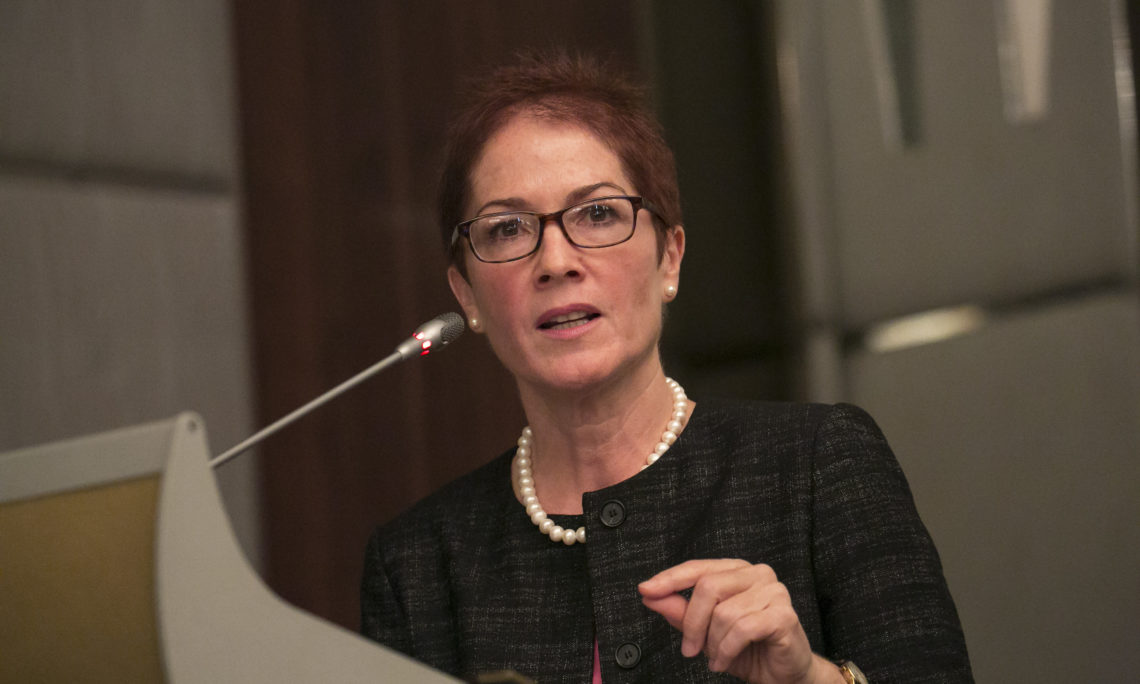 Good Morning.  It’s a great pleasure to join such a distinguished group here today in Kharkiv.

Thank you Acting Governor Svitlychna for hosting us, and thank you, Regional Council Head Chernov for the hard work that went into organizing this forum.

There are several reasons I wanted to come to Kharkiv.

First, the U.S. recognizes the political and economic leadership role that Kharkiv plays among the regions, particularly when it comes to undertaking new initiatives.

After all, today’s gathering is about global integration and almost one year ago today, Kharkiv became the first and only region in Ukraine to open a trade representative office in Washington D.C.

The second reason Kharkiv is important to us is because of the U.S.-Ukrainian business ties in this region, including the cooperation between Turboatom and Westinghouse and between Megabank and the Overseas Private Investment Corporation.

These links remind us of the great potential for even deeper economic cooperation and partnership.  We hope new connections will be made here today with the U.S. companies that joined me, including two OPIC supported investment funds, Horizon Capital and Dragon Capital.

Now, recognizing that attracting investment is only the first step, and that global business needs the right environment in order to grow, I would like to share a few thoughts on reforms as well as our assistance in the region.

I would like to begin by congratulating the Government of Ukraine on fulfilling its IMF obligations and on the IMF Board’s decision to issue the third tranche of its $1 billion assistance.

I would also like to congratulate the members of the government here with me today on the many bold steps it has taken in the last six months to further Ukraine’s progress on the path towards European integration.

The most recent example is this month’s introduction of a new electronic asset disclosure system for public officials.  This system will greatly assist in the identification and prosecution of corrupt officials.

Also, in August, the government introduced compulsory electronic public procurement for all state purchases above a minimal level.  This e-procurement system has increased transparency and already saved Ukraine tens of millions of dollars.

For example, right here in Kharkiv, which is a leading region when it comes to e-procurement and using ProZorro, the region has already seen more than 100 million Hryvnas in savings.

In June, the Rada passed a sweeping law on corporate governance reform which can help improve the management of state corporations and break the historical link between Ukraine’s state-owned enterprises and the Ministries that oversee them.

All of these reforms are in addition to the two anticorruption bodies created in the last two years to investigate and prosecute corrupt officials.  They are now fully operational and pursuing corruption investigations.

But despite this impressive movement forward, there is still work to be done.

The most critical needs for improvement are the business climate, infrastructure, and judicial reform.  Progress in these areas is necessary for the growth of Ukraine’s economy.

When it comes to the business climate, the hardest steps have yet to be taken.  Reforms in key areas, such as customs, taxation, and the protection of intellectual property rights are key.

Tax administration in particular remains an enormous burden and is the principal challenge facing U.S. companies in Ukraine.  VAT refunds continue to be a major source of uncertainty for companies of all sizes, as do the criminalization of tax charges.

The privatization of state-owned assets, which was intended to be launched this summer, stalled when the first test-case privatization of the Odesa Portside Plant was postponed due to an unreasonably high starting price and “toxic” debt.

We are working with the government to get this privatization back on track. A successful privatization will demonstrate “new Ukraine’s” ability to shed Soviet-era assets from its government rolls.

Let me be clear, successful privatizations can showcase Ukraine more than any marketing campaign.

As they say here in Kharkiv, “Dela, Ne Slova.”

Because improving the business climate is the only way to attract new investment in the volumes needed to meaningfully boost the economy, I strongly urge the government to stay the course on reforms.

The other major constraining factor we see to attracting investment is infrastructure.  Roads, rivers, and rail are the backbone of Ukraine’s economy.  And despite decades of underinvestment, Ukraine has a network worth upgrading.

Modernizing infrastructure will be critical to ensuring improved access to markets for agriculture and other commodities.  Signing free trade agreements, like the DCFTA, is not enough to unleash a country’s true trade potential.

The rapid modernization of Ukraine’s infrastructure will require increased corporate governance, improvements in transparency, and in some cases, privatization.

But the final factor that is the most important in my view, the one factor that is the lynchpin to Ukraine’s future, including enhancing the rule of law that is essential for a successful investor climate, is the judicial system.

Low levels of expertise, low salaries, and a tradition of political and oligarchic interference have prevented the deep and comprehensive judicial reform Ukraine needs to ensure a fair and impartial judiciary.

Given the importance of judicial reform in this grand reformation, I was very pleased to see that in June, the Ukrainian Parliament passed judicial amendments to the Constitution.

These amendments will streamline the judiciary, strengthen judicial independence and integrity, and reduce political influence.

In June, the Rada also passed a law that establishes a three-tier court system, that adds a specialized Anti-Corruption Court, and that mandates a competitive selection process for all judges, beginning with the Supreme Court.

Nonetheless, incremental steps like this, which occur on a quarterly basis, and which gradually add up over time, are the reasons I am inspired by Ukraine and remain optimistic about its future.

I have lived and worked here before, from 2001-2004, and returning a decade and two revolutions later, I am inspired by what I’ve seen so far.

So my message to the government is and will continue to be that what has been done so far is necessary, but not sufficient.  We must keep going.

We must remember that real reform won’t happen overnight and it will not only come top down, grassroots reforms can accelerate this process tremendously.

However, it is a long-term process that will take commitment, patience, and honest assessments from government leaders about what they are doing, how much it costs, and how long it will take.

To reaffirm our commitment to this long term process, allow me to conclude today with a few words about U.S. assistance and examples of American-Ukrainian partnership here in Kharkiv.

Last April, the U.S. signed a Memorandum of Understanding with former Governor Rainin to partner with the oblast to broaden and deepen trade and investment ties and expand cooperation on science, technology, and the social and humanitarian sectors.

Since then, we have worked closely with former Governor Rainin and acting Governor Svitlychna to help Kharkiv become more prosperous.

For example, through the Agency for International Development we have provided nearly $10 million in humanitarian and development support to Kharkiv Oblast in the last year.

We are also currently working with the Oblast Administration to develop an Administrative Services Center, which will allow Kharkiv residents a simplified, transparent, and more accessible one-stop shop for obtaining government services.

USAID will soon launch a new agriculture activity to help small and medium-sized farms develop their business and obtain access to credit.

Finally, I am pleased to announce a new program that grew out of our ongoing cooperation with the Kharkiv Government and Governor Svitlychna.  Starting today, we now have an open call for Kharkiv NGOs to submit anti-corruption grant proposals for funding through the U.S. Embassy.

Through this initiative, we hope to generate local solutions aimed at addressing corruption and fostering mechanisms that promote local government transparency and accountability in Kharkiv oblast.

I began my remarks by saying that Kharkiv was a leader among regions in Ukraine.  The success of these cooperative efforts between U.S. and Kharkiv government and non-government organizations in implementing these programs underscores this belief.

Let me close therefore with a friendly challenge to the business community, a challenge to match the cooperative efforts of U.S. and Ukrainian government and non-governmental organizations by exploring joint business ventures that will bring Kharkiv further into the global economic community.