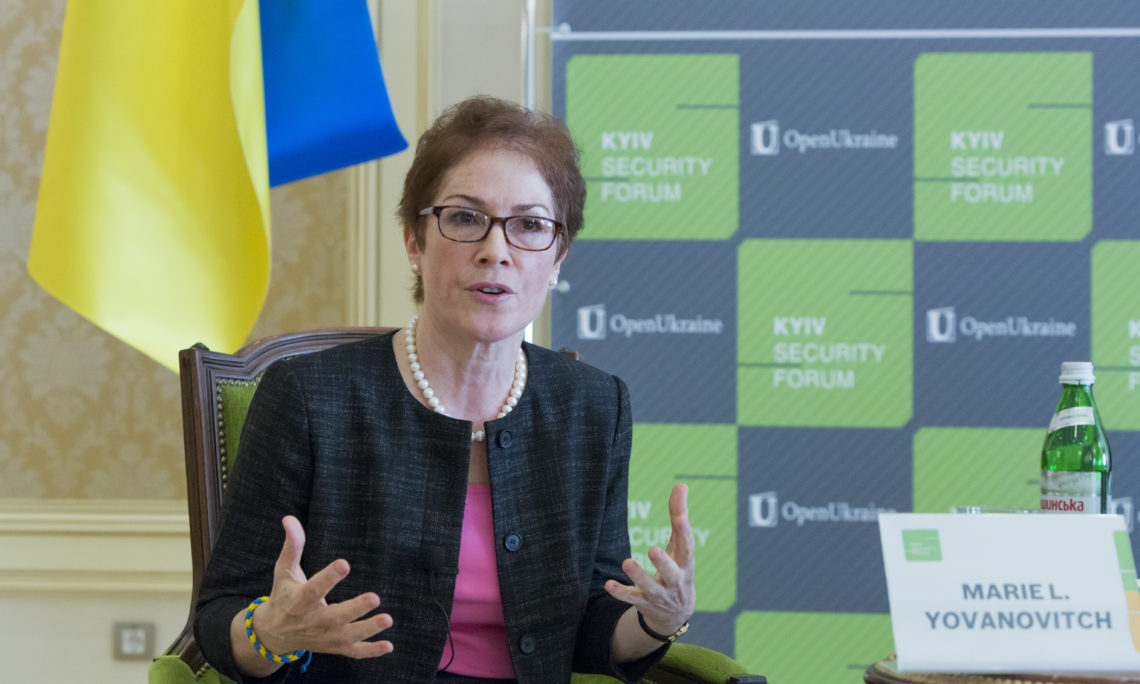 I just wanted to note that over the last twenty-five years, Ukraine and the United States have been steadfast partners, and I think that relationship has been strong and deep across all spheres, including – of course- in the security sphere.  I was just in Washington about three weeks ago and had a wide set of consultations, including with people on the Hill.  And I can confirm – as many of you know – that support for Ukraine in Washington, I think, remains very, very strong.

So that was the first set of questions.  The second set of questions, equally important, is what is happening with the reform agenda in Ukraine?  Is Ukraine still committed to that reform agenda?  Is there progress, especially on the anti-corruption part of that agenda?

And as we see the new administration moving forward – and it is, even though there is so much anticipation about where we’re going, it is a new administration; we haven’t even seen one hundred days yet. But I think we can see our policy being articulated more and more clearly.  It started – I think as many of you know – with Nikki Haley, our permanent representative at the UN, in her first set of remarks at the UN.  It was actually a special session on Ukraine and she came out with very strong comments.  Vice President Pence, Secretary Mattis have come out with very strong comments especially during meetings in Europe.  And Friday at the NATO ministerial, Secretary Tillerson made some very strong comments and it was, I think, pretty comprehensive in terms of the full set of issues in terms of Ukrainian-American relations.  So like you I want to look at that pretty closely because I think it was an important statement and I think many of you are experts, but I think it bears repeating.

So Secretary Tillerson noted U.S. steadfast support for Ukraine.  That we are standing firm in support for Ukrainian sovereignty and territorial integrity.  That we continue to support the Normandy four on Minsk and we hold Russia accountable for its Minsk commitments.  That sanctions will remain in place until Moscow reverse the actions that triggered those sanctions.  That we are concerned about the escalating violence along the line of contact and the targeting of civilian infrastructure – which is something particularly worrisome that we have been seeing recently – by Russia-controlled separatists, and that it risks a humanitarian disaster.

Secretary Tillerson called on Russia to use its influence over the separatists and to put a stop to the violence and to end the attacks against the OSCE monitors –again another particularly worrisome development.  And he said that there is no basis to move forward on the political aspects of Minsk until there is a visible, verifiable, and irreversible improvement in the security situation.  He noted that Crimea-related sanctions must stay in place until Russia returns the peninsula.

The Secretary also discussed the importance of redoubling efforts on reform including uprooting corruption, increasing transparency in the judicial sector, strengthening the banking sector, and pursuing corporate reform in privately administrated and state-owned enterprises.  Because Ukraine is really fighting two wars: there’s the war that we can all see in the East, fighting for territorial integrity and sovereignty, but Ukraine – as I think many of you recognize – is also fighting another war, all over Ukraine and right here in Kyiv, regarding what kind of a country is Ukraine going to be?  And this is how the Secretary put it. Secretary Tillerson said, “it serves no purpose for Ukraine to fight for its body in the Donbas if it loses its soul to corruption.”  So is Ukraine going to be the country that the demonstrators on the Maidan demanded?  Is it going to be a country that is transparent, accountable, produces results for the people?  Is that the country of the future here in Ukraine?  And I think the answer has to be yes, for Ukraine’s future as well as for our strong relationship.  In this respect the Secretary also noted that anti-corruption institutions must be supported, resourced, and defended and that we in the United States must continue to support Ukraine on its reform path.

We certainly understand that reform is not easy, and it’s only made harder with the situation in the east.  Clearly these are very, very challenging times.  But I think many of us would say that that makes it even more urgent that Ukraine move forwards on reforms in all sectors, whether that’s economic, political, or security.  I think it’s popular often to say – and I happen to believe it which is why I repeat it – that Ukraine has made more progress in the last three years, in terms of reforms and where it is going, more positive progress than it had in the preceding 22.

When we think back to the important things that happened, whether it was stabilizing the economy – and I think now we tend to forget how critical the situation was three years ago where basically the government was sort of one payday away from bankruptcy and what would have happened to the country then in terms of stability – so stabilizing the economy, strengthening the banking sector, freeing itself from dependence on Russian gas.  Who could have predicted that three years ago?  And I think it was very difficult – all of these reforms were very difficult – but Ukraine managed to do it, and manages to continue to do it.  And if you’ll indulge me I’ll tell you why I think Ukraine has been successful in that reform effort over the last three years, although reform efforts are never a straight line.  It’s sort of movement forwards and sideways and backwards and forwards and so forth, but I think overall the last three years have been fairly positive.

And the reason that I think that Ukraine has been successful in its reform efforts and can continue to be successful is because of the people.  As I’ve already said, I was here a number of years ago from 2001-2004 – I left right before the Orange Revolution – and the big difference between then and now is the expectations of the Ukrainian people.  Not just the intelligentsia and the people in government, but I think people throughout Ukraine have the expectation that government is now going to be transparent, accountable, and produce results that will benefit the people, not just a select few.

And the Ukrainian people have put skin the game.  We see people have quit their jobs in private sector and are working in civil society or in the government to produce those results.  And I have to say I find that very inspiring and I think others do as well.

I’d like to just conclude these shorts remarks by just recalling – many of you probably heard Prime Minister David Cameron in his public statements last week when he was visiting Ukraine.  And he also validated the progress that Ukraine has made throughout the last two years and said “You know, you’ve proved you can do it so don’t lose that momentum.”  So I’d just like to repeat that: that it’s important for Ukraine to keep on going.  Reform, as I said, is never a straight line and the U.S. really wants that strong partnership with Ukraine to continue.  We want to continue to support those reform efforts – which have to be Ukraine’s reform efforts.  And we believe that that reform path will lead to a Ukraine that is more prosperous, democratic, and ultimately secure.  And I think will also make for a more confident and reliable partner for the United States and for NATO.  And I think that that’s really in Ukraine’s interest as well as our own.