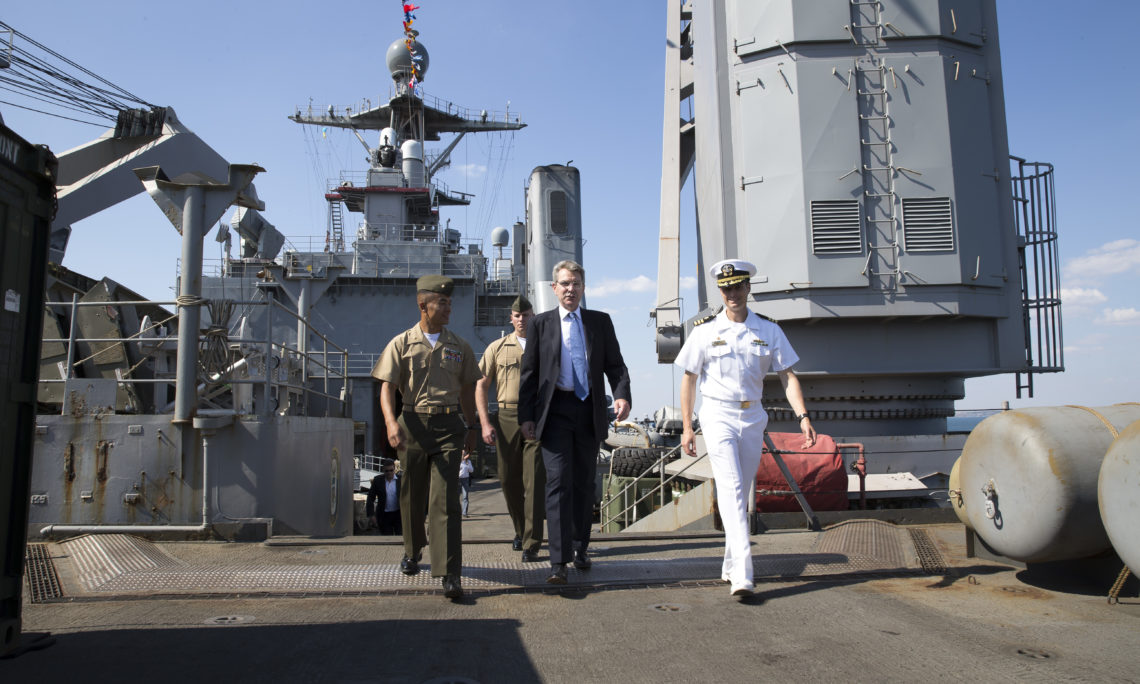 AMBASSADOR PYATT:  Dobroho Ranku!  It is a wonderful pleasure for me to back in Odesa for another edition of the Sea Breeze exercise.  I’d like to begin my remarks by offering profound thanks to Admiral O’Connor, all of his colleagues from Sixth Fleet and in particular the Sailors and Marines of the USS Ross and the USS Whidbey Island.  My hometown is San Diego, California, and with due apologies to all of you from Norfolk, San Diego considers itself the Naval Capital of the United States so I have taken a special interest in the relationship between our two Navies.  In this regard I want to offer warm congratulations to Admiral Voronchenko on his new office and also on the work that we will do together.  And it is a special pleasure for me as I wind up my tenure in Ukraine that I’m able to be here today as part of what is surely one of the largest military exercises that our countries have ever done together.

This is the first Sea Breeze in which we have been able to have two U.S. ships in port.  We are also very glad to be able to participate this year in the land phase of Sea Breeze through an amphibious landing exercise that will involve more than 350 American personnel.  All told we will have more than 400 total Sailors and Marines involved in this exercise along with aircraft, helicopters and maritime patrol platforms.  But this is also a significant multi-national exercise with 13 nations participating and in this regard I am especially glad to be joined this morning by my British counterpart.  Aside from being one our closest allies, the U.K. also has a very long tradition of partnership between our two Navies.  Minister Poltorak and I were reminded of this last winter when we flew out to the USS Harry Truman and when got to the air traffic control deck we discovered a large contingent of Royal Navy Officers who were there preparing for their carrier operations.  So thank you, Judith.

I want to wind up by simply applauding the strong focus that both Minister Poltorak and Deputy Prime Minister Klympush-Tsintsadze place on defense reform.  I have been American Ambassador to Ukraine during a period of extraordinary and unimaginable aggression against this country committed by Russia.  The guiding principal of American policy throughout this period has been to stand with the people of Ukraine and to underline the importance of restoration of Ukraine’s sovereignty and territorial integrity.  So as the Minister pointed out, a key objective of our defense partnership is to raise the capacity of the Ukrainian people and Ukrainian armed forces to defend your own sovereign territory.

We have committed over 600 million U.S. dollars of assistance to support that effort, but the most important engagement that we have had, I am convinced, is that  which has helped to modernize Ukrainian defense structures and to optimize the main themes through which Ukrainian security leaders can enhance the capabilities of the Ukrainian people and Ukrainian armed forces.  So like Deputy Prime Minister Klympush-Tsintsadze, I very much hope that this exercise will be a mechanism for our forces to learn from you, but also to raise the preparedness and professionalism and capability of the Ukrainian Navy.  And in that context, it is a great honor for me to know that the Unites States has been so steadfast in standing with the people of Ukraine through this uniquely challenging period.  Dyakuyu.