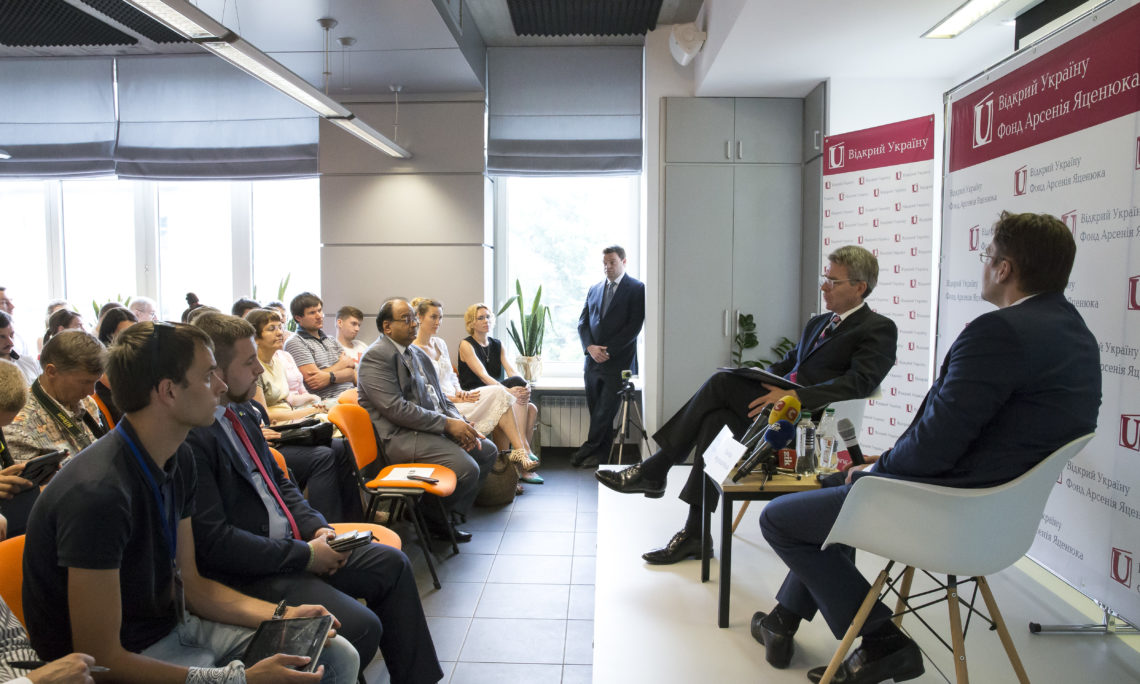 July 26, 2016. MODERATOR: I am so pleased to introduce to you Ambassador Geoffrey Pyatt, who is the best friend of Ukraine and who did a lot to our country and has stood with us through many changes.  I believe that though the Ambassador is leaving soon Ukraine, we will stay in touch and this is not his last visit to our events, and he will do a lot in future for our country.  Ambassador, the floor is yours for short introduction, and then we will continue with Q&A from the audience.

AMBASSADOR PYATT: First of all, thank you, Taras for the introduction.  It’s wonderful to be here.  I particularly like this forum, because it’s young people.  You are the future of Ukraine.  I am also pleased to have this opportunity, because I know my friend and colleague Ambassador Tombinski recently did the same thing.  He and I have had an extraordinarily productive partnership throughout my time here, so it’s a real honor for me to be following in his footsteps in this venue as in so many others.

I am coming to Kyiv today after a weekend in Odesa.  As I was thinking about this conversation that I want to have today, I was reminded in many ways what I saw in Odesa over the weekend is a perfect metaphor for the changes that I see happening in Ukraine.  Three years, two-and-a-half years ago, the Ukrainian Navy was on its back after the invasion and annexation of Crimea.  Today, we are conducting very complicated exercises with 13 other countries, and it’s very clear that there is an enormous sense of pride among the Ukrainian marines and sailors that I was able to see this weekend.  In the same way, I also spent some of my time in Odesa at the International Film Festival.  And it was so impressive to see the creativity, the energy there among the Ukrainian entrants.  And I think, it was a good window into the remarkable upwelling of pride, but also artistic creativity that Ukraine has seen since your revolution two-and-a-half years ago.  Ultimately, the process of change that’s underway here is going to be decided by all of you.  There is the process of generational change that’s underway in Ukraine today.  One of the most exciting things I see is the young people who are coming to the Verkhovna Rada, who are part of the Government – all of these Deputy Ministers, all of whom seem to be thirty-something years old with a very different vision of where they want to take the country.  What’s really important to me is I found this not just here in Kyiv, but also in the oblasts, whether it’s in Kharkiv, or Odesa, or Dnipro, or Lviv – and one of the great pleasures of my job is I get to travel more than most Ukrainians, I’ve seen a lot of this country over the past three years.  And you see this extraordinarily impressive enthusiasm for participation in democratic governance, shaping the future of your country.  That is so valuable.  So, I would encourage everybody to hold on to that.

Taras and the team have sent me a terrific list of questions that people already put together and I really want to get to that quickly.  But I was asked to do a little bit of a stocktaking.  So, I will spend just two or three minutes on that right now, in terms of where I think Ukraine stands in the process of reform, in the process of building the modern democratic European state that the Ukrainian people have chosen and so richly deserve.  You really don’t need me to do this, because you have this fantastic civil society.  Indeed, in many ways, Ukrainian civil society is, probably, the strongest, the most active anywhere in Europe today.

As I was thinking about my remarks today, I was looking up a document that was recently published by the Reanimation Package of Reforms, and RPR flags many of the same issues that I would identify, if I was trying to assess progress.  It’s things we all know.  It’s progress in establishing new anti-corruption institutions, the NABU, the anti-corruption prosecutor, the National Agency for the Prevention of Corruption.  It’s the selection of the new Prosecutor General – and I want to come back to that a little bit later.  It’s Prozorro and the changes that are happening in the government procurement system.  The savings figures are astounding.  Using these online transparent digitally-driven platforms, savings of up to 1.7 billion hryvnia, money that is currently being stolen from the Ukrainian people by individuals who manipulate the procurement process.  RPR also identifies areas one I’m especially proud of of course is the patrol police which the United States has been actively involved in and remains involved with today trainers from the United States, from states like Texas and California who have come here to work with their Ukrainian counterparts.

The energy sector has seen extraordinary transformation, one of the greatest successes I would argue of the past 2.5 years.  The Ukrainian Government has been denying Russia the energy weapon of which Moscow and Gazprom have used over the years to deny strategic choice.  This is the first winter, last winter, the first winter in history that Ukraine had to buy no gas directly from Gazprom.  That is a declaration of energy independence and today, if Ukraine chooses, or if Naftogaz chooses to purchase gas from Gazprom fine, if the price is right, why not.  But the point is never allow yourselves to be manipulated into the position where the Kremlin is able to use energy as a weapon to manipulate Ukrainian politics, to deny you strategic choice, and to place at risk your sovereignty and security.

I was with Prime Minister Groysman today along with my counterparts from the IMF, from the European Bank for Reconstruction and Development.  I was very encouraged to hear the clear message he shared with us, which he has said publically before, but it was good to hear him say it today as well, that he is completely committed to see the law of energy regulator pass through the RADA this autumn.  It is extremely important to complete this process of transformation of the energy sector.  I would also applaud the steps that the Groysman government has taken to move toward unification of energy prices.  This has been called the most significant anticorruption step that Ukraine has taken in 25 years independence.  And I think that’s right because ultimately all of these distortions in pricing have been manipulated by oligarchs, by people like Firtash to enrich themselves at the cost of the Ukrainian people.  When I arrived here 3 years ago Ukraine was spending 7% of gross domestic product on energy subsidies, simply unsustainable, so that transformation is of fundamental importance.

RPR also talks about the changes in the Judiciary, the constitutional amendments on judicial reform of extreme importance and to create the opportunity to build a rule of law sector in which the Ukrainian people have confidence.  Also progress in the area of media freedom and I’m delighted you got Espresso TV streaming today, a great example of all these new ongoing non-oligarch controlled media outlets.  They are helping to transform the media space in Ukraine and build a media as a tool for the accountability of democratically elected politicians and that’s the role the media needs to play.

I would like to add a couple of other issues which are not on the RPR list, but they are important – one is the financial sector where the NBU, the Central Bank has performed miracles in terms of restoring its credibility with international markets, demonstrating the banks ability to perform as an independent respected regulator carrying out their role and their work based not on political influence, not on the question of which oligarchic group or another is most influential, but based on the rule of law.  And that’s how Ukraine is going to unlock your economic potential.  The fact that the NBU has been able to shut down more than 1/3 of Ukraine’s financial institutions, many of which were dominated by corruption, related party lending, nontransparent procedures, all of that progress is a credit to Ms. Hontareva and the very strong team that she has put in place at the top of the NBU.

Another area that I would flag that is deserving of credit is what Ukraine has achieved through the resetting of your democratic institutions: a presidential election in May of 2014, that many people thought wouldn’t  happen, and then RADA elections in October of 2014, and then last year the local elections – all of which have had the effect of resetting Ukraine’s democratic institutions, legitimizing governance and bringing to power not a completely new system, but a lot of people who have demonstrated their credentials as real reformers and working for the people who have elected them.  So I would site all those on the plus side of the ledger.

In terms of work for the future, I really want to leave that topic for the conversation that we’re going to have now.

One issue though that I would flag which is of overarching importance relates to the rule of law.  And if I had to identify from my three years in Ukraine the single area that’s still requires the greatest sustained focus and the greatest sustained pressure and engagement from civil society and young people like yourselves it would be rule of law – building a judiciary, a prosecutorial service, a court system in which the Ukrainian people have confidence.  And that’s the only test that matters.  It doesn’t matter what I think or it doesn’t matter what Ambassador Tombinski thinks.  What matters is: are these institutions which enjoy the trust and confidence of the Ukrainian people?  In that regard, I’m encouraged by some important first steps including their constitutional reforms on the judiciary, but also the selection of a new prosecutor general, who has an extremely open and constructive relationship with his American counterparts.

We actually have an American, a Ukrainian-American who worked in our Department of Justice as a prosecutor dealing with criminal acts in the U.S. who has now come to Kyiv and is working with Prosecutor General Lutsenko.  We also, have had our FBI, our law enforcement experts working with Ukrainian counterparts.

This is not easy.  Change is never easy and it is particularly difficult in a system like Ukraine where the justice systems have been so heavily manipulated by corruption oligarchic groups over the years.  But a windows open and I am absolutely convinced that this is the best opportunity that Ukraine has had since independence to build the kind of rule of law society that the Maiden Revolution, The Revolution of Dignity was intended to achieve and which the Ukrainian people so clearly deserve.  So Taras, let me leave it there and I am delighted to take the conversation in whatever direction is useful.  And I’m looking forward to some challenging questions.