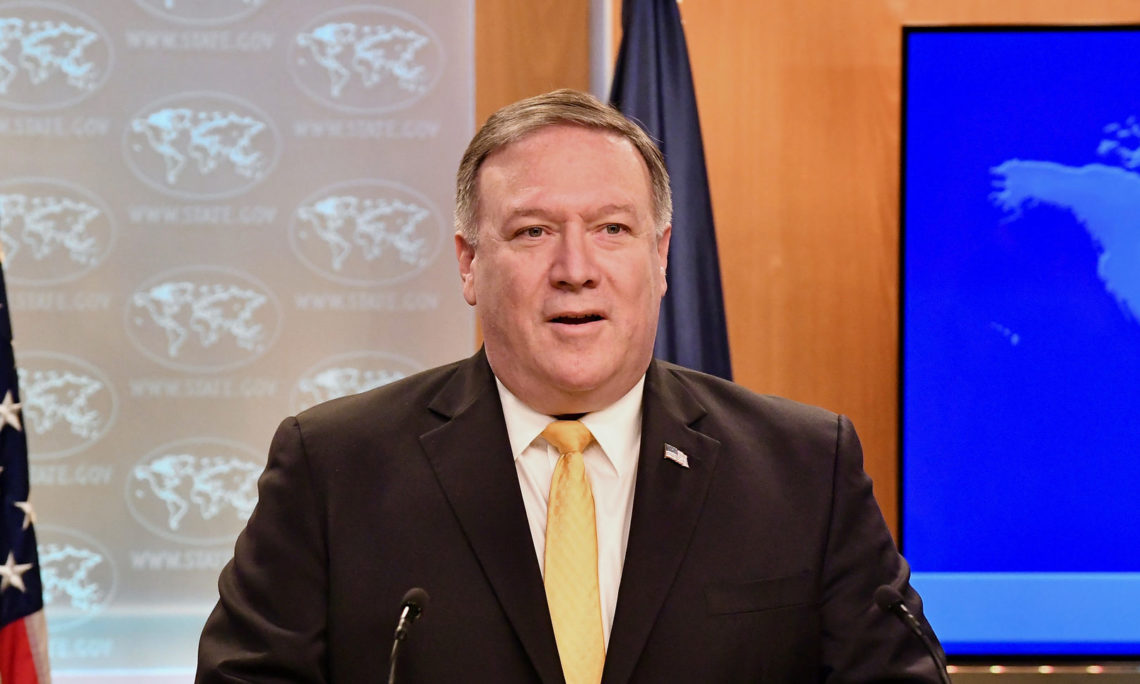 MS NAUERT: Good morning, everyone, and welcome to the State Department. Thank you for coming in so early this morning for the unveiling of the International Religious Freedom Report. I’d like to first introduce Secretary Pompeo, who will give some brief remarks and an announcement. And then Ambassador Sam Brownback, who is our global ambassador for religious freedom, will then unveil the report and take some of your questions. And I’ll moderate, since we all know one another, so I’ll call on you. And then we’ll have to wrap it up.

Thank you so much. Secretary Pompeo, go right ahead, sir.

SECRETARY POMPEO: Thank you. Thanks, Heather.

Good morning, everyone. It is my great privilege to join you this morning and to release the 2017 International Religious Freedom Report. This report is a testament to the United States’ historic role in preserving and advocating for religious freedom around the world.

Religious freedom is in the American bloodstream. It’s what brought the pilgrims here from England. Our founders understood it as our first freedom. That is why they articulated it so clearly in the First Amendment. As James Madison wrote years before he was president or secretary of state, quote, “conscience is the most sacred of all property,” end of quote.

Religious freedom was vital to America’s beginning. Defending it is critical to our future.

Religious freedom is not only ours. It is a right belonging to every individual on the globe. President Trump stands with those who yearn for religious liberty. Our Vice President stands with them, and so do I.

Advancing liberty and religious freedom advances America’s interests. Where fundamental freedoms of religion, expression, press, and peaceful assembly are under attack, we find conflict, instability, and terrorism. On the other hand, governments and societies that champion these freedoms are more secure, stable, and peaceful.

So for all of these reasons, protecting and promoting global respect for religious freedom is a priority of the Trump administration. As our National Security Strategy so clearly states: “Our Founders understood religious freedom not as the state’s creation, but as the gift of God to every person and a fundamental right for a flourishing society.” We’re committed to promoting religious freedom around the world, both now and in the future.

The ambassador and our team in our Office of International Religious Freedom have been working tirelessly throughout the federal government and with our colleagues here at the department and in embassies overseas with NGOs, foreign partners to defend religious freedom in the farthest corners of the globe.

This report demonstrates the hard work of American diplomats to protect American and universal values. I’m proud of my team in completing this report. The release of the 2017 International Religious Freedom Report is critical to our mission to defend religious liberty. It brings to light the state of religious freedom all over the world. It documents, across 200 countries and territories, reports of violations and abuses committed by governments, terrorist groups, and individuals so that we may work together to solve them.

I have a number of examples here. For the sake of time, I’m going to pass through them. But know that we are working in countries around the world to ensure that religious freedom remains the case, and where it is not, that it becomes so.

Governor – or excuse me, Ambassador Brownback will provide to you more details. But we are very ignited[1] to announce that later this year we will celebrate the 20th anniversary of the International Religious Freedom Act, a law that reinforces America’s commitment to religious freedom and to helping the persecuted. It is also the 70th anniversary of the Universal Declaration of Human Rights by the UN, which proclaimed the importance of human rights, including the right for religious freedom.

The world has made important strides, but we still have a lot of work to do. In that regard, I am pleased to announce that the United States will host the first ever Ministerial to Advance Religious Freedom at the Department of State on July 25th and 26th of this year.

I look forward to hosting my counterparts from likeminded governments, as well as representatives of international organizations, religious communities, and civil society to reaffirm our commitment to religious freedom as a universal human right. This ministerial, we expect, will break new ground. It will not just be a discussion group. It will be about action. We look forward to identifying concrete ways to push back against persecution and ensure greater respect for religious freedom for all.

The ministerial will also be my first to host as a Secretary of State, and that’s very intentional. Religious freedom is indeed a universal human right that I will fight for, one that our team at the department will continue to fight for, and one that I know President Trump will continue to fight for. The United States will not stand by as spectators. We will get in the ring and stand in solidarity with every individual who seeks to enjoy their most fundamental of human rights.

Thank you all for your time. Ambassador Brownback, thank you for this putting this together. I look forward to working with you on it.

QUESTION: Sir, do you plan to meet with Kim Yong-chol?