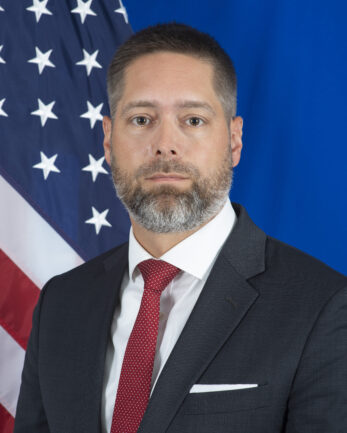 Christopher W. Smith is the Deputy Chief of Mission in Kyiv, Ukraine. Prior to this assignment, Chris served as the Director for Eastern Europe and the Caucasus at the National Security Council. Chris joined the Foreign Service in 2005. Overseas, he has served in Georgia, Turkey, Afghanistan (with ISAF), Cyprus, Ukraine, and most recently in Armenia as Deputy Chief of Mission. Domestically, Chris served as Special Assistant to the Assistant Secretary for Arms Control, and completed a master’s degree in national security and strategic studies at the US Naval War College in Newport, Rhode Island. In 2018, Chris received the Warren Christopher Award for Outstanding Achievement in Civilian Security as a result of his work on anti-corruption, justice sector, and law enforcement reform in Ukraine. He is married with three sons.