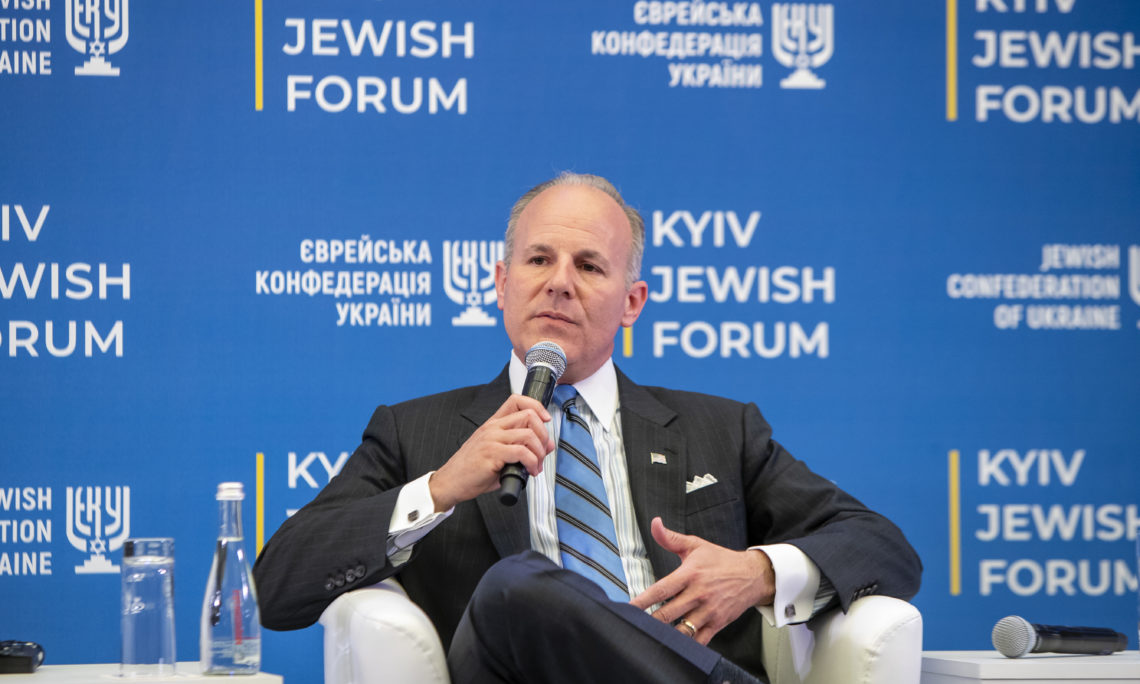 It is such a pleasure to be here. First of all, let me apologize for my lateness.  I am here directly from Israel. I was supposed to arrive last night.  But apropos to the subject of anti-Semitism, some 600 rockets have been fired into Israeli civilian areas — which is really an attempt at mass murder of Jews in the state of Israel. And so I met with – I and my colleagues, U.S. ambassadors to six countries, actually – we met with Prime Minister Netanyahu, and because of the scheduling and everything that he’s dealing with, it had to be later, so I had to change my flight.  So that’s why I’m late.  But I wanted to mention that because even in today’s world, and even in the state of Israel, Jews have to be aware that there are those who are targeting the Jewish people for extermination, even today.  And that’s of course an awful fact, and that’s why we’re here. That’s why we’re here at a conference like this – to talk about not only anti-Semitism but to talk about the Jewish future.  And what I want to spend my time on [inaudible] is not so much giving the bad news.  I often am asked to talk about the state of anti-Semitism in the world today, attacks on Jews.  You all know the statistics and maybe you’ve talked about it here before I walked in.  Attacks are up, vandalism, anti-Semitic hate speech on social media, textbooks in classes sometimes. And even in the United States you all know, even in the United States a famously philo-Semitic country, we’ve been dealing with awful, horrific attacks on Jews in synagogues, which was unimaginable recently.

But, we’re now in Ukraine. And so I’m not going to talk about the bad news. I want to talk about how extraordinary it is, where Ukraine has come, and how far Ukraine has come, is a miracle that stands — really in the very long history of the Jewish people — stands in a unique place.  We, you know, the United States, we don’t take sides in elections.  But, we have to comment on how unprecedented it is that Ukraine has elected a Jewish president-elect and has a Jewish prime minister.  That is something that is absolutely stunning.  And there’s something even more stunning.  I’ve been following this very closely, again not because we take sides, but I very much wanted to see how the Ukrainian electorate would react to the dynamics of this election.  There’s something even more extraordinary about the election of a Jewish president.  What is more extraordinary is that his Jewishness was entirely irrelevant. It did not come up. I’ve been briefed regularly, including classified briefings that I’ve been having on this subject, tracking what’s going on here.  And it is nothing short of stunning that in any country in the world, certainly in a country in Europe, given the history here, given the history of eastern Europe, that a candidate would never have his Jewishness raised as an issue in the campaign.  By the way, I don’t even know if that would happen in the United States.  And so, I want to just say that we have got to really appreciate how extraordinary this is and how far Ukraine has come.  And one thing that I look forward most to, in our meeting later — and I understand I’ll be meeting with the president-elect later today, as well – talking about how I can be a champion of Ukraine in the months and years to come. You know part of my role — it’s not only to pummel and punish anti-Semites and to pressure, to apply diplomatic pressure when pressure needs to be applied.  My role is also to support countries that are doing extraordinary things. And I look forward to being a champion of Ukraine and really empowering Ukraine to do even better.

Now, of course, no society’s perfect.  The United States has issues that we need to work on.  Everyone knows that, it’s been in the news a lot lately.  There are issues here in Ukraine as well.  No society is perfect on the issue of anti-Semitism or frankly on any subject, right?  We’re not perfect and we have to better ourselves and have to work to fix what we should be doing better.  But this is really an extraordinary time and I want to compliment not only the candidates but the Ukrainian electorate, again not for the results, because that’s not an issue I take, but for the way this campaign was conducted and the remarkable lack of focus on the Jewishness of the candidate who was leading in the polls and could have been attacked very easily on that issue.

Question to Special Envoy Carr:  We have been very lucky for the past 50-60 years.  Ukrainians in good times or bad times have been sensitive to anti-Semitism.  But as an American Jew growing up in Manhattan, it’s very foreign to us. You have a big agenda ahead of you, and I’m wondering how you [inaudible verb] American Jews, not so much to San Diego and Pittsburgh but to the New York Times.

Special Envoy Carr:  That’s a very great question, an important question. We’ve been very lucky as Americans, the United States is the most philo-Semitic country in history. But let me say that we’ve been especially lucky for the past two years, because we have an administration now — from whom I bring you all greetings, from my boss Secretary of State Mike Pompeo, and his boss, the President of the United States.  And I can tell you that as a matter of policy and a matter of focused intention, we have never been more committed, and no president and no team has ever been more committed to the fight against anti-Semitism, to the protection of the Jewish people throughout the world, and to support the state of Israel.  Never before.  And so I am really thrilled to be able to represent an Administration so focused on this issue.

Now, so in the United States and around the world, one of the things Andy said in response to the last question, about the [inaudible] definition, the anti-Zionism component is very important, because putting aside fringe extreme groups, as dangerous as they are, such as perpetrated Pittsburgh and San Diego, not groups, lone wolves inspired by ideology coming from that part of the spectrum.  What’s happening that is sweeping the United States and Western Europe and a lot of other parts of the world is an anti-Semitism that is newer.  And it is anti-Semitism that masquerades as anti-Zionism. If you just switch the word Jew for the word Israel, or switch the word Jew for the word Zionist, it’s all okay, and you can say anything, and you can print anything, and you can abuse people in an unvarnished way.  If you just don’t say Jew.  Just don’t say that word, say Zionist and Israel and it’s all okay.  You referenced the cartoon in the New York Times, that is an example, certainly.  What’s going on on the campuses in western Europe and in the United States is nothing short of appalling.

And let me tell you how dangerous this is.  I’ve had a lot of disturbing meetings in the last three months that I’ve been in this position, as you can imagine.  Probably the most chilling that I’ve had of all of my meetings is with a Labour MP, UK Labour MP, who walked out of the Labour Party and said I will not be, I will not sit around the table with anti-Semites. It was her explanation for why she walked out.  And she said to me, this disaster that we’re dealing with, this all started on the campuses, and we did nothing because they were students.  And then it came to the Labour Party and we did nothing because it was a fringe, and now we’re in serious, serious trouble.  And so I think it is so important for us to combat not only the traditional anti-Semitism in the world that doesn’t conceal what it is and says it’s Jew hatred. But also the Jew hatred that hides behind this fig leaf of anti-Zionism. The danger of this anti-Semitism is that it’s widely accepted. And that’s something we have to fight all the time. And so that’s been a focus of mine, and it’s  the focus of the President and the Secretary, Secretary Pompeo stood before 18,000 people at AIPAC and said anti-Zionism is anti-Semitism.  And that was a groundbreaking statement by a U.S. administration.  I look forward to carrying that message around the world.

With regard to summarizing in one sentence, I would say I could even summarize it in one word: unity.  We have to stand together and fight anti-Semitism together in every form, wherever it appears. Whether it appears in Ukraine and it will – I mean, again, every society has issues. Whether it appears in Ukraine or it appears in western Europe, or it appears anywhere else, we’ve got to stand united.  Jewish, non-Jewish, all decent people have to stand united against this ancient human sickness that President Trump calls a vile poison. And it is a vile poison.  Because anti-Semitism destroys every society that embraces it.  And so we all have to stand together united and fight this ancient sickness together, and that’s how we will build a better world for our children.