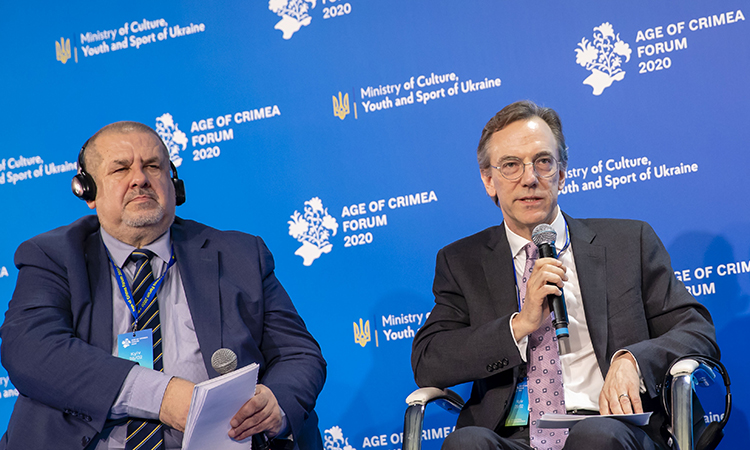 Thank you very much.  I’m honored to be here this afternoon along with my distinguished panelists.  Thank you to the organizers of this important day to mark the anniversary. Thank you to Emine for leading our discussion.

I’m also glad to see so many members of the international community here today, alongside our Ukrainian partners.

Because I think it sends an important message, that together, we stand — we as the international community — stand with Ukraine in support of Ukraine’s sovereignty and territorial integrity.

We stand with Ukraine against Russia’s aggression in Donbas and Russia’s illegal occupation of Crimea.

And together, we can reaffirm today that Crimea is Ukraine.

As Secretary of State Pompeo said in his July 2018 Crimea Declaration, our unwavering position is that we reject Russia’s attempted annexation of Crimea.

We call on Russia to respect the principles to which it has long claimed to adhere by ending its occupation of Crimea and fully restoring Ukraine’s territorial integrity.

We have consistently raised Russia’s aggression in Crimea around the world, in order to rally international support for Ukraine.  This is also to ensure that Russia’s illegal occupation of Ukraine is never accepted by the international community.

At the United Nations, the United States called last week upon Russia to end its campaign of intimidation against Crimean Tatars.

The United States also continues to back up its words of support for Ukraine and for Crimea with action.

The United States, as I said, will maintain sanctions against Russia until it returns control of Crimea to Ukraine.  In fact, just yesterday, President Trump issued an official notice that enables the continuation of these sanctions.

Through our assistance programs, including through USAID, the United States is partnering with Ukraine to ensure justice, accountability, and the protection of rights of displaced persons from the peninsula and Crimeans more broadly.  We are also helping to enhance the broadcasting into Crimea, to ensure that the people of Crimea have access to free media rather than only to Russian disinformation.

We also seek out opportunities to provide support to Ukrainian civil society organizations working to support the people of Crimea – both those who remain in Crimea and those who have been displaced through Russia’s aggression.

As an example, I encourage all of you to visit the exhibition at Vernadsky Taurida National University opening today entitled “Hostages of the Occupation.”  The U.S. Embassy was pleased to support the Crimean Tatar Resource Centre’s efforts to raise awareness about the desire of Crimean Tatars to live freely in Crimea.

The United States continues to provide support to Ukraine more broadly – as both the governments and civil society take steps to build a stronger democracy, a more prosperous economy, and to enhance Ukraine’s defense capabilities.  This progress will ultimately benefit all the people of Ukraine, including in Crimea.

We will continue to stand firmly with the people of Ukraine in support of Ukraine’s Euro-Atlantic future.

Together – Ukrainians, Americans, and our other international partners can and must continue to hold Russia accountable for its illegal actions.

For its part, Russia can and must cease its illegal occupation of Crimea and respect the international order.

Thank you very much.  I look forward to further discussion.