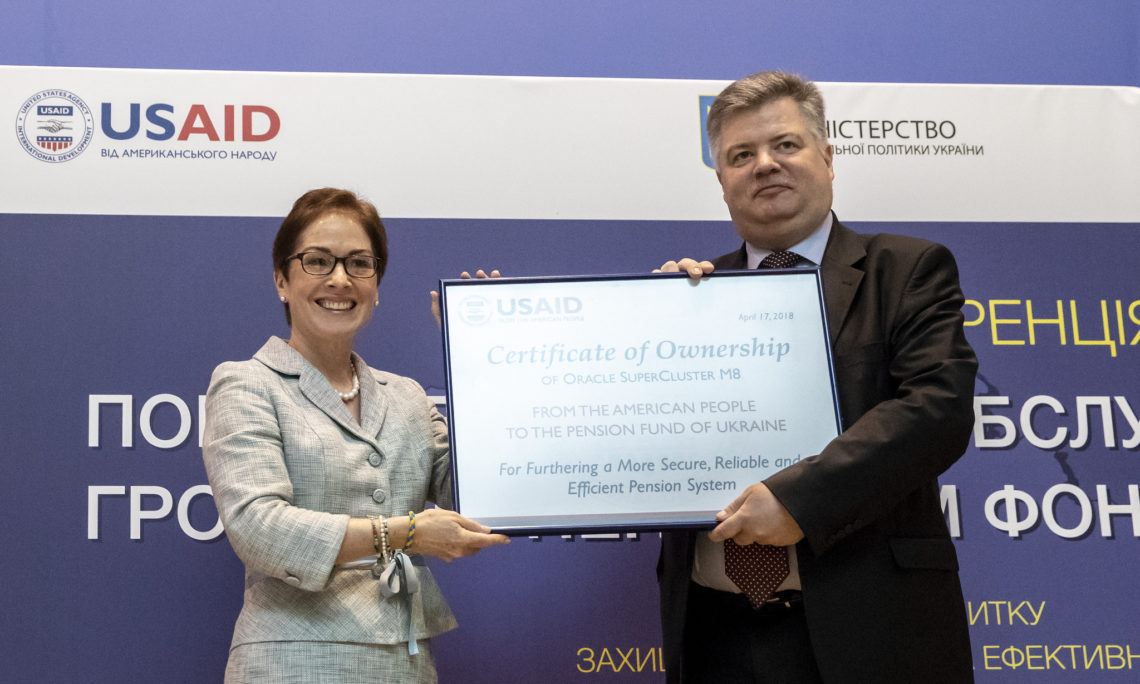 Thank you everybody for attending what I think is a very important conference. And I just wanted to say hello to Vice PM Rozenko, to Minister Reva, and to Chairman Zarudnyi, as well as our many other distinguished guests.

I am really pleased to be here today to mark the official handover of one of the world’s most powerful data servers.

I am confident that this server will improve efficiency and responsiveness while better safeguarding the pension data of over 42 million Ukrainian citizens.

So, that is kind of a wonky topic. Why is this important? In part because pensions touch all of us who are lucky enough to live long enough. And who here is looking forward to living that long, and living in old age in poverty and despair? I don’t think any man would be raising that particular proposition, and that is why this is so important. It’s important because it represents an unspoken contract between the government and its citizens, and between one generation and the next. And so then, when we see photographs of people who are older and are able to be receiving pensions, and people who are younger, who are paying into that system, but also are hoping that the system will be viable when they, too, will be at age to receive pensions.

It’s a team effort. It has to be based on trust, and the understanding that everybody has to pay in. And it’s also this: pensions, for many people, are the primary–sometimes the only–interface with the government. So it is really important to get it right.

And Ukraine has taken vital steps towards transforming that important relationship.

I think that the landmark legislation that the Verkhovna Rada passed in October last year set a strong foundation for a revitalized pension system–but there is more to do.

But for individual savings to be effective, the government must ensure that Ukrainians have safe and reliable places to put their money. That means developing Ukraine’s financial market and ensuring a stable banking system.

Second, employers need to bring their employees into the formal economy. Too often it’s not until Ukrainians reach retirement age that they realize their employers have not been paying on their behalf, because they were off the books. So while you’re working that seems great, because maybe you get a buzz, likely a higher salary, but when you’re ready to receive that pension, it doesn’t seem so great. Especially if you haven’t been paying in yourself either.

Finally, Ukrainians will only pay into a system that they trust. Credibility and transparency are the cornerstones of that trust.

Ukrainian leaders need to speak the truth – which means resisting false populist promises that there is some magic bullet that will cure the financial problems caused by current pension system deficits.

This is not an issue that is unique to Ukraine. There is no magic bullet, unfortunately; not in the US, not in Western Europe; not in Ukraine either.

So, I congratulate the Pension Fund of Ukraine on taking many of the critical steps required for a more transparent system.

We in the US are proud to provide support as you continue to push forward the necessary reforms to give Ukrainians the prosperity that they demand and that they deserve, even into old age. This server is a tool to help Ukrainians make that happen.

So I’d like to invite the Chairman of the Pension Fund Alexei Zarudnyi to the center of the stage, and we have a certificate that we would like to turn over.