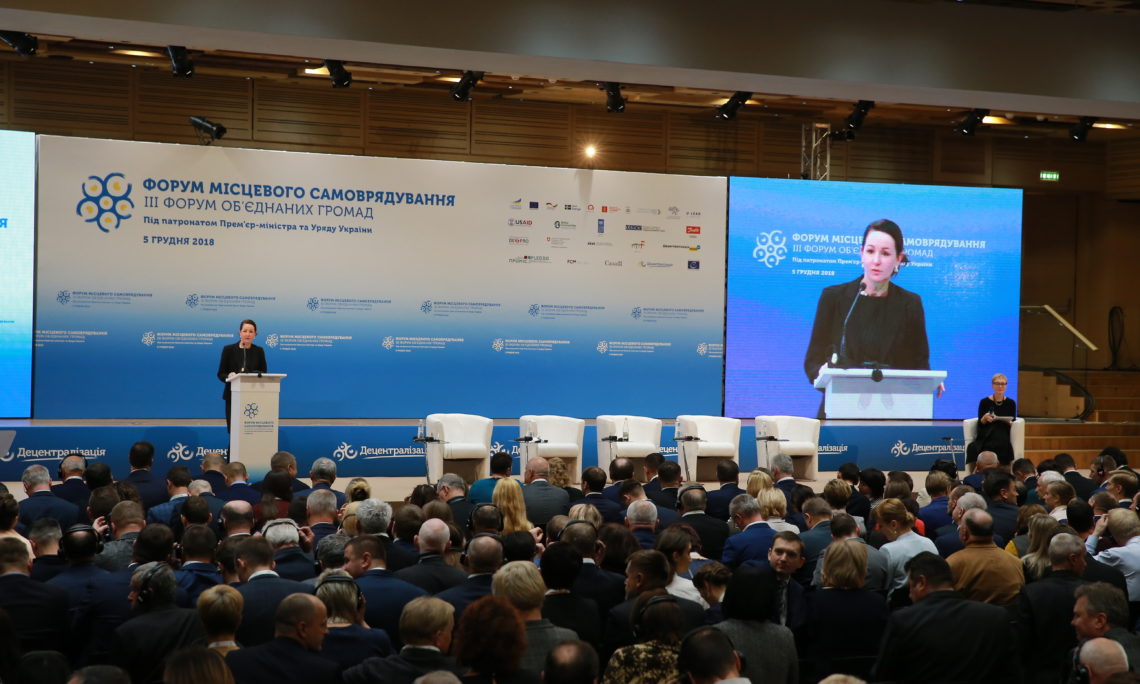 Good morning distinguished guests, ladies and gentlemen.  I am both honored and excited to be here today for the 3rd Annual Local Governance Forum.

I would be remiss if I didn’t start out my remarks by mentioning the extraordinary events of November 25th. Russian vessels attacked Ukrainian naval vessels and captured 24 Ukrainian sailors.

You probably heard Secretary of State Pompeo say that Ukraine has no greater friend than the United States in its struggle against Russian aggression.  So I wanted to reiterate that today.

Likewise in local governance, you have no stronger advocate than the United States.

America has had long-standing and steadfast support for decentralization and self-governance since independence, as a means of strengthening Ukraine. But of course real change to bolster self-governance began in earnest with the Revolution of Dignity. And many of you here today helped lead those efforts.

Since then, the United States has invested more than $60 million – and worked closely with many of you – to ensure those reforms move forward.

And we want to see it progress as far and as fast as possible.  Because demonstrating to the Ukrainian people that government works for them increases their confidence in Ukraine and encourages them to get involved.

What do we want to see? Well, that Ukrainians are afforded what they demanded five years ago: a greater say in governance and a turn toward the West, toward Europe.

That means moving decentralization forward, now. It means continuing to transfer power and decision-making to local authorities. It means a greater say in local budgets within Ukraine’s newly consolidated communities.

We believe in the consolidated communities and their ability to plan and implement the new Ukrainian future. Because when all Ukrainians are involved in building a better Ukraine, you can’t lose.  Those communities are where the United States has targeted a majority of its assistance funding and technical support programs.

But even with all of the progress that we heard about today, some are still skeptical about what’s happened since the winter of 2013 and 2014.

But that’s not the case with decentralization. President Poroshenko cited some really impressive statistics.  Our recent polling shows that people in newly consolidated communities like the new powers and the new budget authorities afforded them, as well as what their local governments are doing for their communities.

In recent months, Ambassador Yovanovitch has made it a priority to visit consolidated communities across Ukraine. And as you well know: the news is good!

Whether in Ternopil in the west or the consolidated community of Slobozhanska in the east – the Ambassador returned with news of seeing re-invigorated local leaders who are committed to improving their communities and the lives of the people who live in them.

For instance, in the community of Kipti, located in Chernihiv Oblast, we witnessed how an emphasis on land management led to new ideas. Community leaders are now more efficiently parceling land there. And they even discovered some unclaimed outlying land that belonged to the community and had gone unused for decades. That’s real progress.

In Pechenizhynska consolidated community, in Ivano-Frankivsk Oblast, residents’ active participation helped bring new waste removal trucks and bins and a new emphasis on waste recycling to that community. That may seem like a modest step, but it means a lot to the people who live there, and they like what they’re seeing.

So decentralization isn’t just about freedom. It’s about giving people an opportunity to do things their own way and offering them opportunities to create prosperity at the grassroots level.

So in these difficult days, I think it is especially fitting to consider Ukraine’s European future. It is a future of growth and prosperity, freedom and security. And yes, it’s a future that demands more decentralized governance.

So I’d like to thank you all for the work that you’ve been doing to advance decentralization in Ukraine.  You are bringing greater promise to a new generation.

And you are also letting your adversaries know that Ukraine is a country that stands together, from its consolidated communities to its capital here in Kyiv.

So I congratulate you for your leadership in the decentralization reform, and I look forward to progress in the very near future.