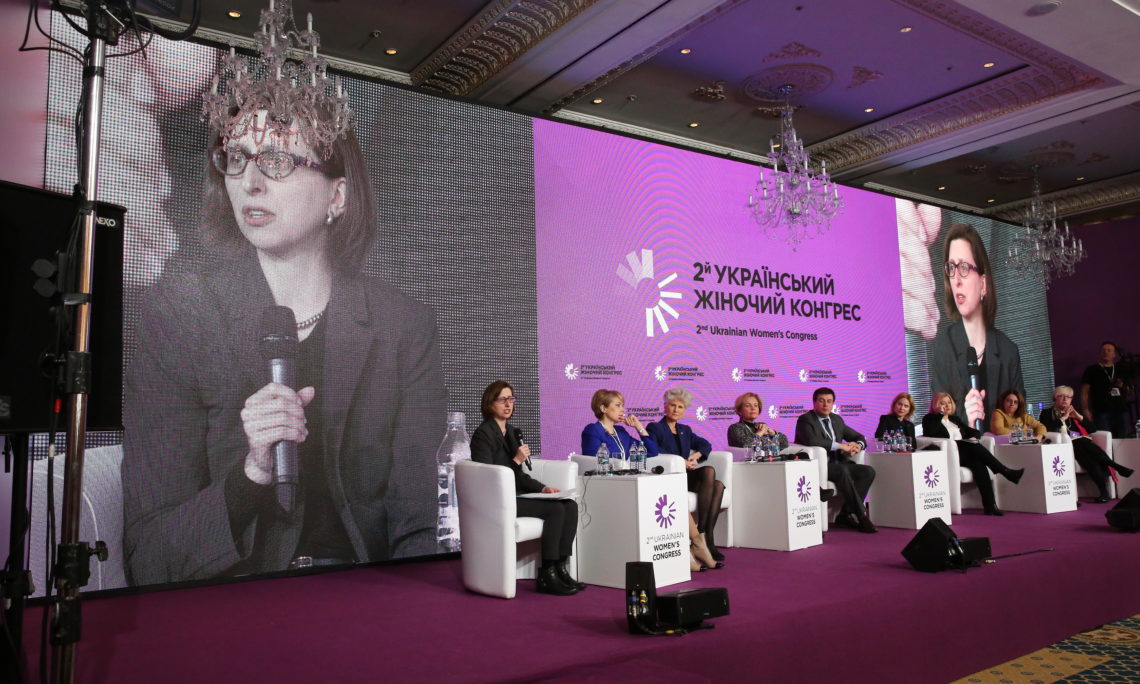 Thank you so much.  It really is an honor to be here addressing this group on this important topic.  And I have to say, I find myself very inspired to be with such a dynamic and impressive group of women. I’ve had the pleasure to welcome some of you to my office in the Pentagon, and it’s just great to be here with you.

I’m going to be honest with you, though.  I almost never talk about the topic of women and security, because I believe firmly that national security is a woman’s issue.  For much of my career, it’s absolutely true that I have been the only woman in the room quite frequently, but I have chosen not to focus on this fact.  Instead, I focused on the job at hand, which is bolstering U.S. and international security and defense.

There are times when I have reflected on the role of women in security.  For example, I look back – I used to work on Afghanistan policy for many years, and the moment that I met that first class of Afghan National Police recruits who were women – it just brought me chills. And I thought at the time, about how that really was a moment in the history of women, and that moment was one when you could see these individual, brave women – very young women, I must say – shaping the course of their country’s future.

But today I really would like to challenge you to think about what issues can you tackle, not because of or despite being a woman, but simply because these issues are just so important.  For me, here in Ukraine, obviously one of the most pressing issues is how to deal with the threat from Russia.  As we all know, this challenge came into sharper focus after Russia attacked Ukraine’s vessels and captured the crew members and the ships, as we just discussed, on November 25.  So today, I want to talk about that.

Today, I want to reiterate to you and to the people of Ukraine America’s steadfast support for Ukraine’s sovereignty and territorial integrity. Russia occupies Crimea and fuels conflict in the Donbas in its attempt to change borders by force and to thwart our goal of a Europe whole, free, and at peace.

We must not accept this aggression as a fait accompli. Russia’s aggression is not simply a matter for Ukraine.  It’s a threat to the region, to Europe, to the United States, and to the stability of the international order.

The aggression of Putin’s Russia should not simply be viewed in the context of its occupation of Ukraine or of Georgia.  Remember, Russia has also provided years of support for the Assad regime’s crimes against humanity, enabling the regime’s use of chemical weapons on its own people.  Russia conducted the first known offensive use of nerve agent on the territory of one of our NATO Allies, the UK — the first time since the founding of the Alliance. And daily, Russia uses propaganda and disinformation to undermine governments across the world. These are examples that expose a long pattern of Russian activities that threaten international peace and stability.

In the maritime domain, the United States condemned Russian aggression in the Black Sea.  This was an attack on Ukrainian vessels as they attempted to transit through the Kerch Strait.  As you all know, this was Russian vessels ramming a Ukrainian vessel and then opening fire, injuring Ukrainian crew, and then seizing the crewmembers and the three vessels.  This represents a dangerous escalation, and a violation of international law.  We call on Russia to return to Ukraine its vessels and its detained crewmembers, and to respect Ukraine’s sovereignty and territorial integrity within its internationally recognized borders, extending to its territorial waters.

The United States also condemns Russia’s harassment of international shipping in the Sea of Azov and the Kerch Strait.  Russia has delayed hundreds of commercial ships transiting Ukrainian ports in the Sea of Azov.  Russia’s actions to impede maritime transit are further examples of the ongoing campaign to undermine and destabilize Ukraine, and Russia’s disregard for international norms.

I want to be clear that the United States will remain committed to building the capacity of Ukraine’s military, to include its naval forces.

The United States recently agreed to transfer to Ukraine two Island Class patrol boats. This is the latest example of America’s long-standing effort to help Ukraine defend its sovereignty and territorial integrity. Since 2014, the United States has committed more than $1.1 billion in security assistance to build the defensive capabilities of Ukraine’s forces and to enhance interoperability with NATO.

Going forward, the U.S. intends to continue providing security assistance support to Ukraine across all domains, including maritime, by providing equipment to support its most critical operational needs.

The adoption of this Naval Strategy is in line with NATO standards and concepts, and represents a strategic decision and a commitment to integrate with Euro-Atlantic institutions and to protect Ukraine’s sovereignty and territorial integrity.

Ukraine has made significant strides on defense reform, including the recently adopted Law on National Security, which provides a legislative framework for aligning Ukraine’s national security architecture with Euro-Atlantic principles.  This constitutes a major step toward Ukraine’s goal of achieving NATO interoperability.

Ukraine must continue to build on this progress by swiftly implementing key provisions of the law to ensure that Ukraine’s defense and security sectors embody Euro-Atlantic principles. The implementation of these reforms will bolster Ukraine’s ability to defend its territorial integrity in support of a secure and a thriving, democratic Ukraine.

Ladies and Gentlemen, today I focused on Russia’s aggression in the maritime space because this is a challenge that’s facing all of us, both men and women.  Security is a woman’s issue.  In order to overcome this and any other challenge, both women and men need to put their minds together and develop the best path forward.  Excluding women means only tapping into 50% of the population’s brain power to solve what are really our most urgent issues.  The United States remains committed to continuing our political, economic, and military cooperation in support of an even stronger and more enduring strategic partnership between our two great nations.  The United States – and speaking for myself personally – look forward to continuing to work with Ukraine, including these very impressive women in Ukraine’s national security community and in other fields.  We will work on these national security challenges together.