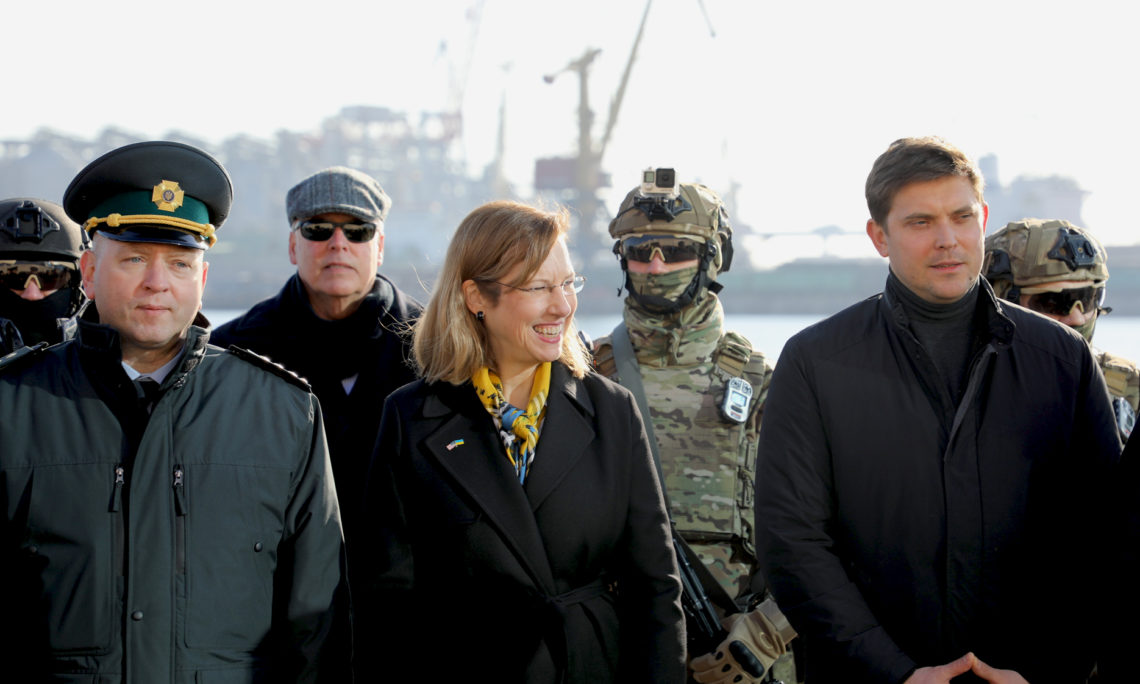 Good morning, everybody.  Dobroho dnya.  It’s a real pleasure to be here in the beautiful city of Odesa on such a beautiful day.

This is my first trip to Odesa and I’m really impressed.  It’s a beautiful city and this port is amazing.

First, I’d like to thank Chairman Deineko and Admiral Kostur.

Today we’re marking an important milestone in the continuing partnership between the United States and Ukraine to enhance Ukraine’s maritime security and territorial integrity.

As Chairman Deineko mentioned, we have been working with the State Border Guard Service since 2001 to help Ukraine’s border security capabilities.  And in recent years, particularly following Russia’s aggression near the Kerch Strait in 2018, EXBS [the U.S. Embassy’s Export Control and Border Security Program] has partnered with the Maritime Border Guard to develop facilities, equipment, and training.

With the attempted annexation of Crimea, Russia seized critical maritime facilities and equipment – capabilities that EXBS is working with Maritime Border Guard to restore.

Russia’s economic attacks against Ukraine in the Sea of Azov have undermined the economic vitality of the ports of Mariupol and Berdyansk and continue to threaten the survival of the ports, like this one here.

That’s why you, the Maritime Border Guard, and the maritime security that you provide, are crucial for safe and free navigation within the bounds of national and international law.

So EXBS will be upgrading the Maritime Border Guard’s Rapid Response Unit facilities in Mariupol and Berdyansk.

But I’d also like to say that the importance of Ukraine’s maritime security extends far beyond the issue of Russia.

Here in Odesa, at this impressive port, we can see the central role that maritime trade plays in Ukraine’s economy all around where we stand right now.

And that makes the importance of the Maritime Border Guard’s role even greater.  One of their very important roles, of course, is combatting smuggling and other illicit activity.

So, the United States will continue to work with you to provide training and equipment, infrastructure improvements, and to support organizational and regulatory reforms.

The equipment we provided in 2019 was valued at over $1 million.  It includes cold weather suits, lifesaving equipment, and law enforcement and other equipment.

We’ll continue to work with you on this important endeavor.  And on behalf of the United States government and the people of the United States, we’re proud to stand together with you, with Ukraine, as you work to secure your borders and protect your sovereignty and rule of law on land and on the sea.