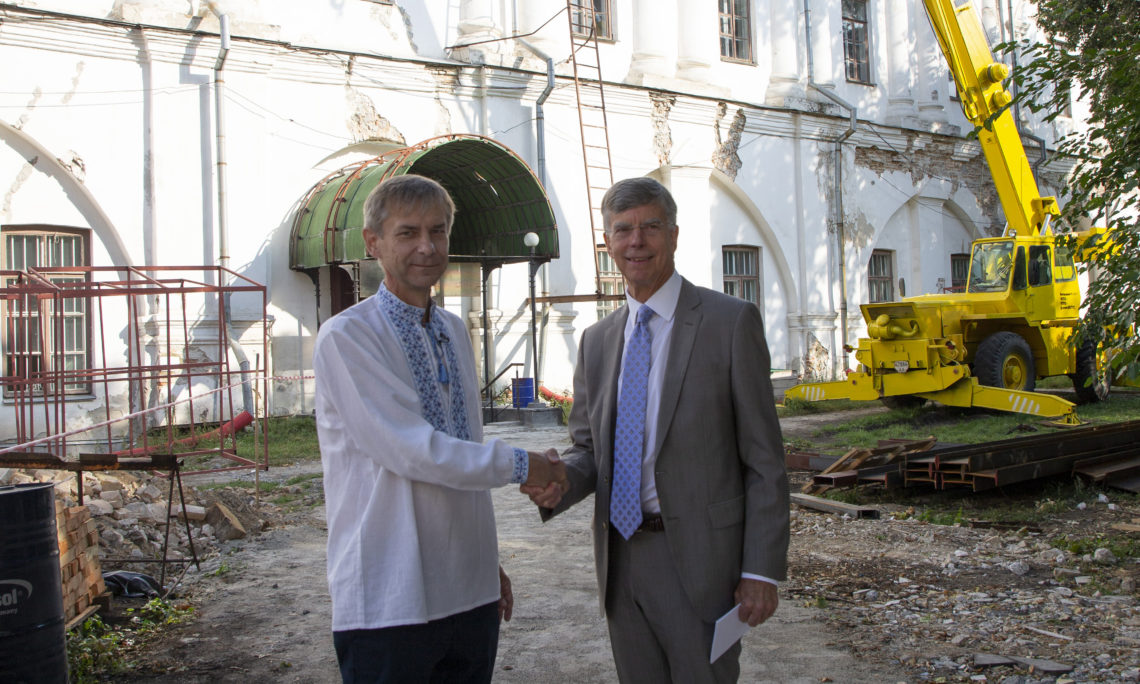 On August 31, Chargé d’Affaires, a.i. (CDA) William B. Taylor presented a U.S. Ambassadors Fund for Cultural Preservation (AFCP) grant to the President of the National University of Kyiv-Mohyla Academy (NaUKMA), Dr. Andriy Meleshevych.  The U.S. contribution of $400,000 will help restore the Academy’s Old Academic Building that houses the single-domed “Church of the Annunciation.”  The multi-year project will restore the famous Ukrainian architectural landmark which was commissioned by Hetman Ivan Mazepa in 1703.  The Old Academic Building is the only academic hall in Ukraine that has continuously operated for educational and cultural purposes for more than 300 years.  The AFCP award will help preserve this historic treasure for future generations.

CDA Taylor noted, “We are proud to support the renovation of the Old Academic Building and look forward to partnering with Kyiv-Mohyla to restore this beautiful structure so that all Ukrainians can enjoy it.  I’m very pleased that the United States can support Ukraine in preserving this historic site.  I look forward to following the progress of the restoration, and joining the many visitors who will come to see this magnificent architectural monument.”  On behalf of the NaUKMA community, President Meleshevych expressed gratitude to CDA Taylor and the American people for their valuable support in restoring the monument which is symbolic of the Ukrainian nation.

The U. S. Ambassadors Fund for Cultural Preservation (AFCP) awards grants for the preservation of cultural sites, cultural objects, and forms of traditional expression in developing countries around the world.  Since 2001, the program has awarded $74 million for over 1,000 projects in more than 125 countries. This includes $1.3 million to support 15 projects in Ukraine.

“This is the fifteenth cultural preservation project in Ukraine that the United States has had the honor to support,” remarked CDA Taylor.  “This shows our respect for Ukrainian cultural heritage and Ukraine’s contributions to world culture.”

A list of projects supported by the Fund in Ukraine can be viewed at: https://ua.usembassy.gov/uk/education-culture-uk/u-s-ambassadors-fund-uk/