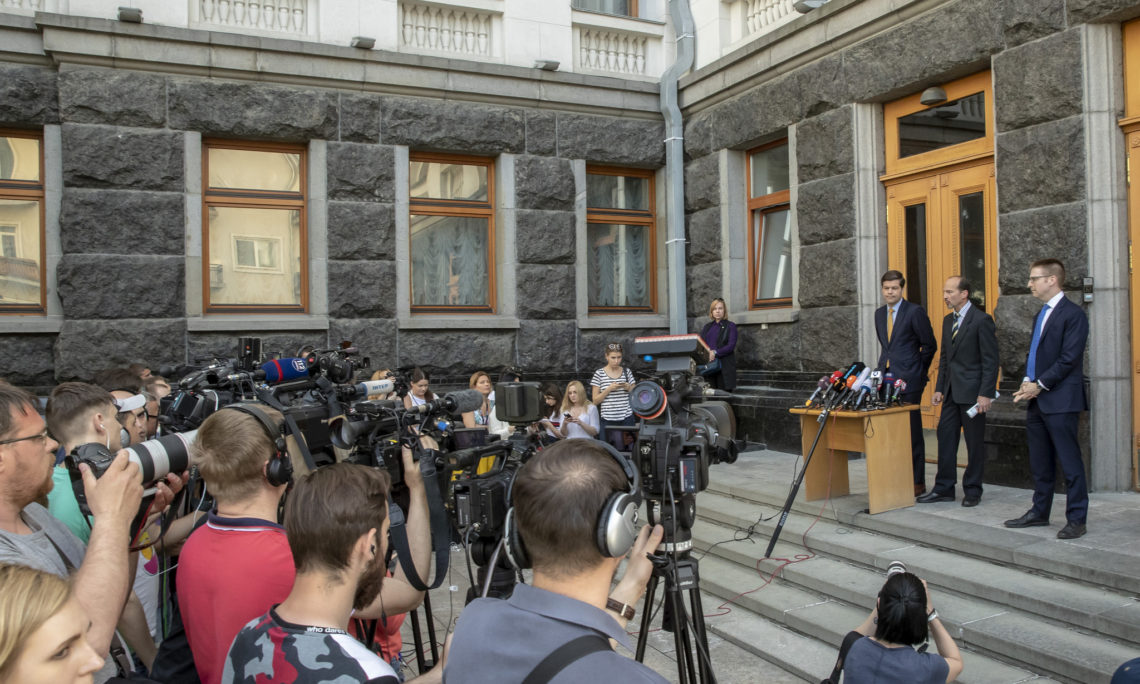 I am very happy to be in Ukraine. I just had a very productive meeting with President Poroshenko. We discussed Ukraine’s security situation including the situation in the East as well as the political and economic front. I underscored America’s unbending dedication to Ukraine’s territorial integrity and political sovereignty.

I underscored America’s unbending dedication to Ukraine and its territorial integrity and political sovereignty.  I made it clear that the United States continues to reject Russian aggression against Ukraine and I expressed the United States’ appreciation to President Poroshenko and his team for the leadership that they are showing in providing defense for Ukraine and all of Europe at such a critical moment.

I just came from the NATO Ministerial in Brussels and Secretary Pompeo expressed his strong support for the open-door policy of NATO in general and in particular for continuing Ukraine’s path towards Euro-Atlantic integration.

We discussed political and economic reforms and I expressed America’s support for President Poroshenko’s ongoing efforts to comply with IMF requirements for next tranch of funding.

And finally, we discussed cybersecurity and I am happy to announce that the United States is doubling our assistance to Ukraine for strengthening its cyber defenses from 5 million to 10 million dollars.
Happy to take your questions.

RFE/RL: How to move forward the process of the Peacekeeping mission in Donbas?

Well, we have made significant effort under the leadership of the Ambassador Kurt Volker to extend the opening for the Russians to find a peaceful solution in Ukraine. I think we have to be crystal clear that this is not a conflict, this is a war. And it’s an ongoing act of aggression by the Russians.

We are interested in finding a solution that is a genuine UN-led effort that brings peace. We are not interested in arrangements that simply act as a fig leaf for the Russians to consolidate the territorial gains that they’ve made. The door is open and the choice is Putin’s.  And until he chooses peace we will continue to increase the cost of aggression.

112: Do you have an information on how sanctions are different in the U.S. and Ukraine ?

We did discuss the sanctions and I understand that the matter is under consideration hre. I don’t have any announcements to be made on behalf of the Ukrainian government but I can tell you that we coordinate very closely with President Poroshenko and his team on the matter of sanctions.

Q: Can you explain differences in approaches between NSC John Bolton and Ambassador Kurt Volker on peacekeeping in Donbass? And second, on sanctions against Russia, should they be enhanced?

There really one U.S. policy on this matter. And that policy has been expressed by all the senior U.S. leadership all the way up to the President and including the Ambassador Volker.
And that is that ceasing Russian aggression and withdrawal of troops from eastern Ukraine is a pre-condition for lifting any sanctions.

On the second question about sanctions, since January of last year this Administration has brought sanctions against 189 individuals and entities.  We are open to dialogue with the Russian Federation, but we will continue to impose costs until Russia makes the choice to not pursue an aggressive foreign policy.

AFP: Michael McFaul urged the G7 to commit publicly in advance to the new sanctions against Russia if it would interfere to the Ukrainian elections next year?

Well I think we’ve been very clear in coordination with our allies that continued meddling in Ukraine militarily or by cyber means in the elections is unacceptable. We’re imposing new sanctions now and will continue to coordinate with our allies to impose additional sanctions if needed.

Q: Should Ukraine expect any signal during the NATO Summit this summer?

We’re working on those matters now and I can tell you that United States remains strongly supportive of the open-door policy and Ukraine’s path to NATO.  And we are in talks with other allies now to coordinate on exactly what form that will take in the communique and forms of deliverables for the Summit. But I think the Alliance continues to stand behind Open Door and stand behind Ukraine.

Q: Should Javelins be used only on the front line or elsewhere, as well?
I think the United States has been clear from the beginning that this is a defensive weapon system and it’s to be used for Ukrainian self-defense.

By U.S. Embassy Kyiv | 3 May, 2018 | Topics: News, Speeches | Tags: Assistant Secretary of State for Europe and Eurasia A. Wess Mitchell