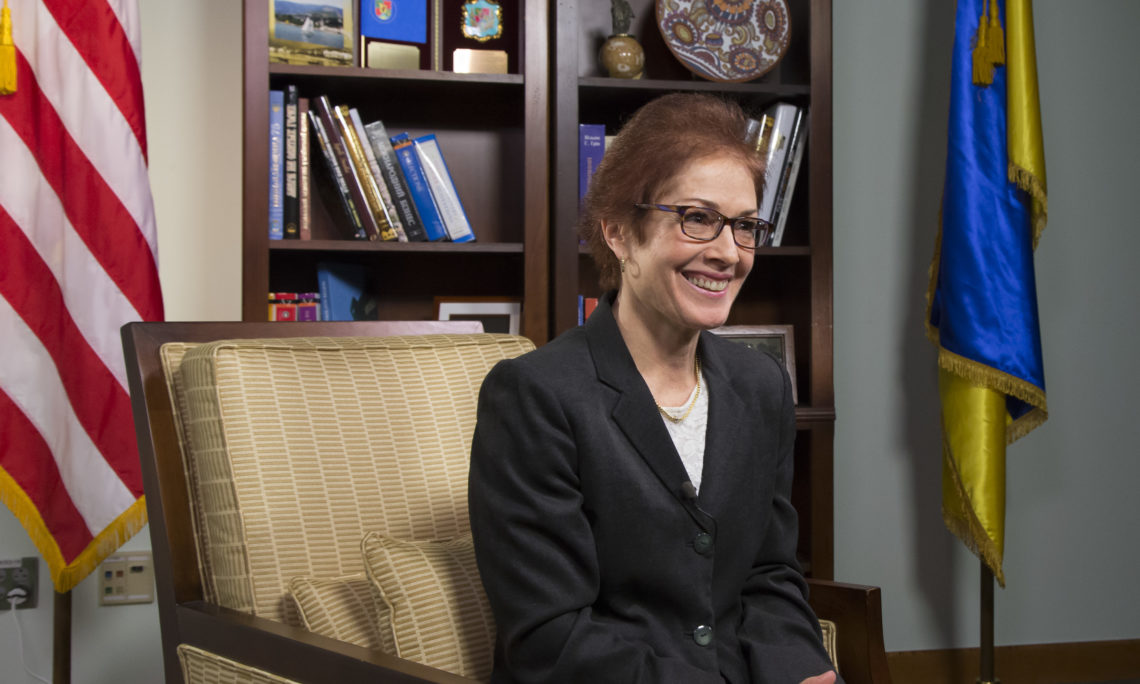 What will the United States and Ukraine be celebrating together in 2042?

The start of a new year is always a time for reflection and resolution. For looking back and looking forward. For celebrating accomplishments, and renewing commitment to goals not yet attained. And as I’ve come to learn after all of my time in Ukraine, it is also a time for celebrating.

This New Year is a key moment for our two countries. In December 2016, we marked the 25th anniversary of diplomatic relations between the United States and Ukraine.

I remember very clearly when the United States recognized and celebrated Ukrainian independence on Western Christmas Day. In many ways it was a moment that defined my diplomatic career by opening a world of possibility.

That world of possibility is still before us: Where will the next 25 years take us? What will we be celebrating together in 2042?

First, we’ll be celebrating the connections between our people. I’ve served in Kyiv twice; first as Deputy Chief of Mission, and now as US Ambassador. Throughout my time here it has been a privilege and honor to get to know Ukrainians. Two memories in particular stick out.

The first was on September 11, 2001. I was in Kharkiv, celebrating the opening of one of our Window on America centers. And I will never forget the outpouring of love and solidarity our delegation received on that difficult day.

Likewise, I will never forget the first time I walked up Instytutska Street and paid homage at the memorial to the Heavenly Hundred, to all those Ukrainians who stood up to defend liberty, shared values, and their country. I have been inspired by your courage in the face of unimaginable challenges, and your commitment to difficult reform.

Throughout, Americans have stood beside the Ukrainian people. American Presidents, Vice Presidents, and Congressional representatives, Democrat and Republican, have come to Ukraine to express our unwavering support.

For many years, Americans have worked with Ukrainian counterparts in places like Yavoriv and Dnipro, sharing expertise to bring Ukraine’s military capabilities in line with Euro-Atlantic standards, or providing those Ukrainians most affected by Russian aggression with needed humanitarian assistance. American businesses have entered the Ukrainian market, bringing with them jobs and international best practices.

Beyond the political and economic arenas, thousands of ordinary Americans have lent their energy in ways big and small to strengthen our bilateral relationship. Peace Corps volunteers, Fulbright scholars, writers, speakers, artists, musicians, journalists, you name it, they have come here to build ties and mutual understanding.

And we’ll still be here 25 years from now, making the bonds between our countries bigger, stronger, and better than they are today.

Second, we’ll be frustrated. With ourselves and with each other, and with unexpected obstacles and delays. Transformational change isn’t fast and it isn’t easy. But change happens, where there is a will.

On Monday, the United States celebrated the birthday of Martin Luther King Jr., who was one of the most influential leaders of the American civil rights movement and one of my personal heroes. In his “I Have a Dream” speech, King spoke eloquently about a future of racial equality in America that seemed unattainable at the time. It inspired a generation – my generation – to make America better.

While the United States still has a long way to go to fully realize Dr. King’s dream, who could have predicted that within a generation we would elect an African American president?

On the economic front, the United States used to be a nation that imported the majority of its petroleum. But after years of careful reforms and tough legislation, we are now closer than ever to full energy independence.

Ukraine has changed, too.

Some changes I see every day when I walk my dog around Kyiv – like a burgeoning arts scene, incredible new independent businesses, and courteous, modern new patrol police.

Other changes aren’t quite so visible.

The ProZorro electronic procurement system has already saved hundreds of millions of dollars. Over 100,000 officials have submitted electronic declarations of their assets and income – an unprecedented step forward for transparency in government. Ukraine has launched a new, competitive procedure to select judges, including for the Supreme Court.

Changes to permits, taxation, and inspections have made it easier and more attractive to do business here. Decentralization is already bringing more decision making power to the Ukrainian people and their local leaders. And the list goes on. This is real transformation that seemed unattainable just three years ago. You should be proud.

Third, we can expect the unexpected. Change leads to uncertainty, and uncertainty is hard. We don’t like not knowing how things will turn out. But one thing is certain: the US-Ukraine relationship will continue as strong as ever. Why? Because of our shared values and our understanding that a democratic and prosperous Ukraine is in the best interest of the United States.

The future of Ukraine is in good hands: in the hands of a generation born free. Ukraine’s young people are smart, connected, and committed. They are open to the West, well-educated, and eager for change. They have demonstrated an appetite for civic activism and volunteerism.

They are Ukraine’s future.

So in the spirit of the New Year, let me close with a call to action. This January, make a resolution to re-commit. To Ukraine’s future, and to our shared future as partners and friends. To reform, to progress. To reject cynicism, and to press on. “Keep marching on, there glory lies; and the glory is my testament,” wrote Taras Shevchenko in his poem, “Fate.” Words that were written long ago, but which still ring true today.

March on, and the US will be there as a supporting partner.

By Marie YOVANOVITCH, US Ambassador to Ukraine, special to The Day