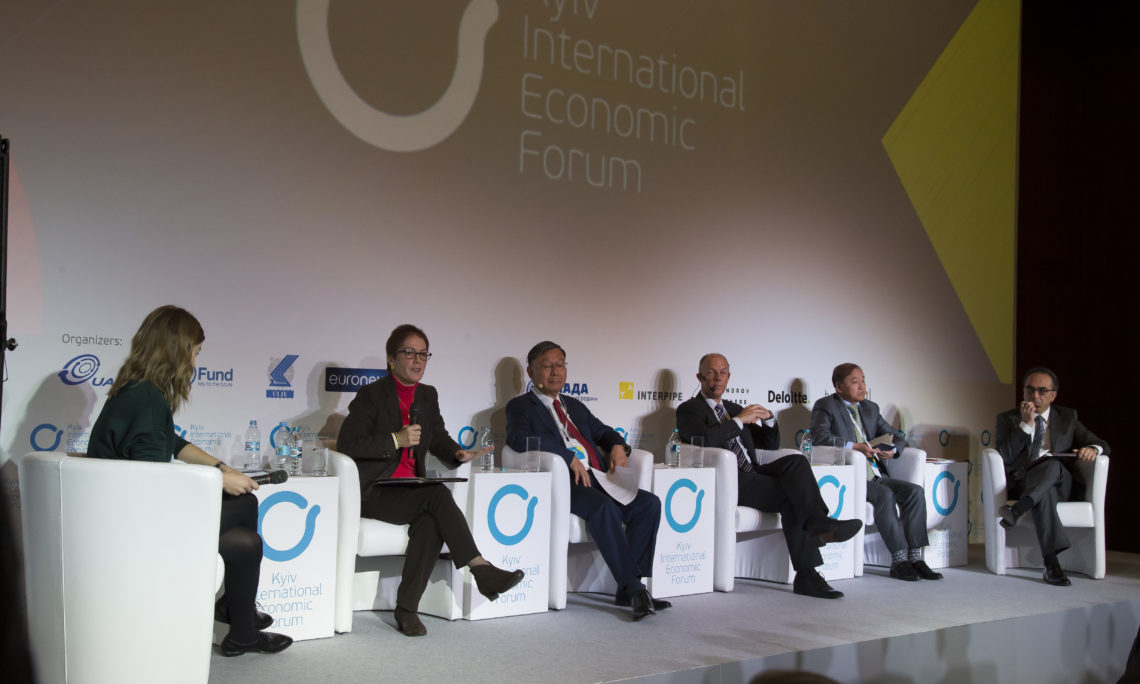 Good Morning. (добрий ранок) It is a great pleasure to join you today.

Thank you Oleksandra and Nicholas for setting the stage so well.

Also, let me briefly thank the Organizing Committee, UAID, the K. Fund, and the Ukrainian League of Industrialists and Entrepreneurs for their hard work that went into organizing the forum.

Before diving into the issue at hand, Ukraine’s role in the global economy, I would like to reflect a bit on my impressions about returning to Ukraine.

As many of you already know, I lived and worked here from 2001 to 2004, when I served as the Deputy Chief of Mission of the U.S. Embassy.

One of the questions I get most often is, “What has changed since you were here last?”

Without a doubt, the most inspiring change has occurred within the Ukrainian people.

I read investigative articles written by watchdog journalists, and the Embassy works with real reformers in society and across the government.

A decade ago, I never imagined that an entirely new generation of Ukrainians would be shaping a new society while also demanding systemic change based on the rule of law.

Today, I see that people’s expectations of government have changed – and rightfully so.

Ukrainians expect a fair, transparent, and accountable government. The Ukrainian people will accept nothing less and it is up to the government to deliver. This is a sea change and the only word for it is inspiring.

The other impression I have relates to this panel discussion and Ukraine’s role in the global economy.

When it comes to the issues facing the economy and businesses, unfortunately, I do not yet see the same massive sea change I see in society writ large.

Of course, I would be remiss to say there hasn’t been progress, and real hard-fought advances.

I respect the efforts of those in the previous and current governments to push for change.

This includes stabilizing the macro economy, consolidating the banking sector, and bringing gas tariffs in line with international norms.

The Rada passed a sweeping law to reform corporate governance at Ukraine’s state owned enterprises. E-procurement for all state purchases via Prozorro is now required.

And once implemented, recent amendments to the Constitution will strengthen judicial independence and integrity.

Because of these and other reform efforts, in September, the government fulfilled its IMF obligations, and the Fund moved forward with the third tranche of its assistance.

In parallel, the United States also signed and dispersed our third one billion dollar loan guarantee.

Together, these disbursements send a strong message to international investors that Ukraine fulfills its commitments.

But despite this movement forward, much more remains to be done.

She and the companies presented a list of concerns, and suggestions for how Ukraine can move forward:

It needs to better protect intellectual property as well as adopt improved tax and customs policies.

And it would greatly benefit from the privatization of state-owned enterprises.

These mirror the top concerns of U.S. investors a decade ago.

In essence, despite the social revolutions, the Ukrainian investment climate has lost a decade while other regions and countries raced ahead in the fight for investment and growth.

We all know that there is a sense of urgency among ordinary Ukrainians to see tangible reform take shape.

It is imperative that Ukraine moves forward with reform – even standing still can leave Ukraine behind in the global competition for investment.

This year, Ukraine’s GDP is likely to grow by one percent, to almost $100 billion. This is not enough to lead to real change in the lives of ordinary Ukrainians.

For this, Ukraine needs six to eight percent growth over the next few years.

Just two weeks ago I was speaking at Kharkiv’s investment forum alongside Boris Lozhkin, who now heads Ukraine’s Investment Council.

To put this in perspective for you, other countries that have attracted this kind of average foreign direct investment since the economic crash of 2008 include Turkey, Poland, and Italy.

Think about that. Ukraine needs to attract scarce foreign direct investment dollars at the same levels as Poland and Italy every year for the next twenty years to achieve its economic and development goals.

Given that Ukraine’s ranking on the World Economic Forum’s Global Competitiveness index is 85 (of 138), Poland’s is 36, Italy’s is 43, and Turkey’s is 51, Ukraine has much work to do and needs to be relentless in implementing reforms.

Investors have choices, and we want them to choose Ukraine. The good news is that most investors don’t deny that the potential is here. At least theoretically, this goal is attainable.

But investors will not come without further reforms. As Secretary Pritzker said, Ukraine cannot take its “foot off the gas.”

This brings me to anticorruption steps that should have been straight forward, but instead have become complicated, not to say undermined.

We are concerned, though, by reports that there may be further legislative attempts to weaken asset declaration rules.

I understand the discomfort public officials may feel at having to make such declarations — as an ambassador, I am required to make a declaration myself every year.

Yet these declarations are a critical part of an active, vibrant, democracy – an obligation of public officials around the world.

In the United States, Europe, and in other countries, the need to provide this information is critical to cultivating much needed public trust in government officials and institutions.

This is particularly true in countries like Ukraine, where vested interests have a long history of using public funds and state-owned enterprises to enrich themselves.

Now is not the time to step back from the hard-won asset declaration law or e-Declaration system, but to move forward with critical reforms.

It is also not the time to submit legislation to reduce the independence of the National Anti-Corruption Bureau, but to move forward with prosecution and conviction of “big fish” corrupt figures.

In conclusion, only a sustained, long-term, commitment to reform will propel Ukraine higher in global rankings for foreign direct investment.

Clearly there are multiple opportunities here for investors in information technology, aerospace, agriculture, or infrastructure, the common denominator to the attractiveness of each sector is Ukraine’s human capital.

What we are really speaking about is people, the same people I talked about in the opening of these remarks, and the same Ukrainians who inspire me.

The U.S. Government supports and believes in Ukraine’s human capital.

As long as the Ukrainian people remain committed to the course they chose two years ago, as long as they continue to demand fairness, transparency, and accountability from their governments, we see a bright future for Ukraine.

Together we will steer Ukraine towards realizing its full economic potential.

Thank you all once again for the opportunity to be here with you today.