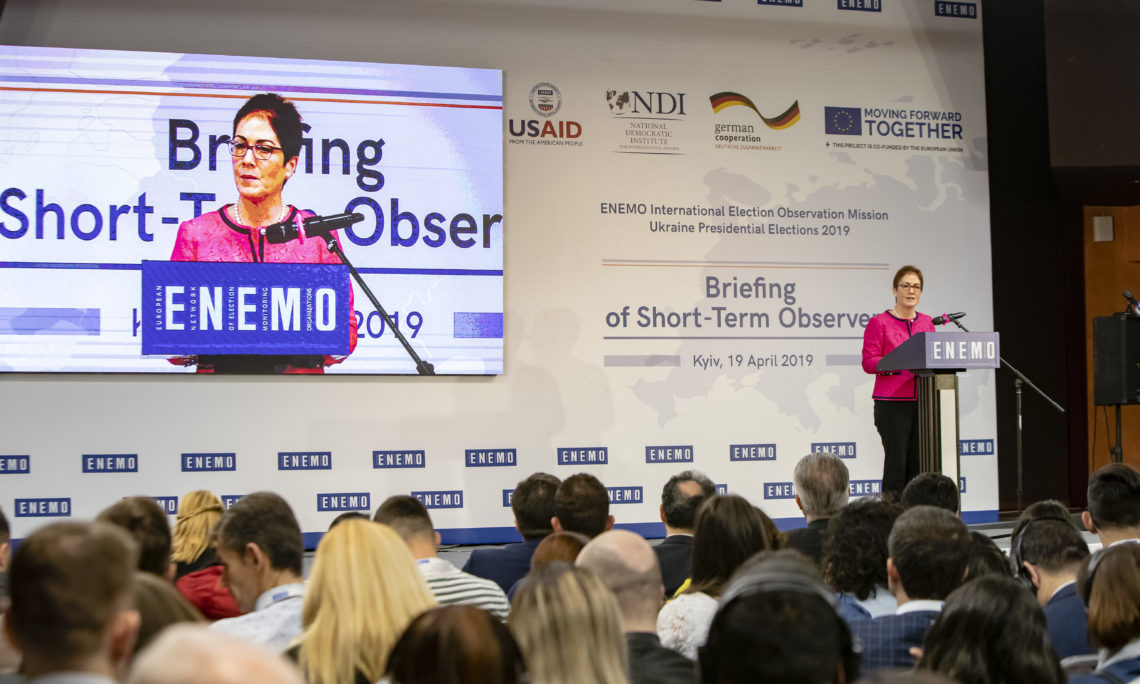 It is such a pleasure to be back here three weeks later for round two, or right before round two, with all of you from ENEMO.

We are so appreciative of the diverse, independent, and professional group that ENEMO always fields for Ukrainian and other elections.

As you probably know — and I know that some of you are returning for this second round — as short-term observers for the final round of this presidential election, you are making a vital contribution to Ukrainian democracy at a pivotal moment in Ukrainian history.

Elections are the cornerstone of a democracy.  Run well, they confer legitimacy on the people’s choice.  If the process breaks down, however, it can distort the will of the people.

It’s still early days, but so far the electoral process is unfolding pretty smoothly.  ENEMO’s own preliminary statement on the first round of the presidential election, as well as assessments by other international observation missions, reflected that the election was mostly conducted in accordance with the laws of Ukraine and in line with international standards.

I think the Ukrainian people, Ukrainian institutions deserve a lot of credit for that.

Despite the historic number of candidates on the ballot — and some of you remember how long it was — despite the registration of some questionable observers, the March 31 elections were orderly and free from violence and systemic disruptions.

That is an important development.

Like some of you, I visited a number of polling places on March 31 and I was really impressed, actually, by the level of preparedness, the level of openness on the part of the Ukrainian election commissioners that administered a complex process with integrity.

Nothing is perfect, no elections anywhere in the world are perfect and there’s always room for improvement.  But when I went to the polling stations, people greeted me, they asked me to sign in, they asked me if I had questions, they asked me what I wanted to see, who I wanted to meet – it was a very open process and it inspired confidence.

This is actually in contrast to my first experience monitoring elections here in Ukraine.  I started in the early 2000s, almost 18 years ago, or 19 years ago, and it was very different.  Even in 2014, when I observed presidential elections in Berdyansk, there was nervousness, you know, why was I there, why did I need to know when the next meeting would be [inaudible], and so forth.  Really, a completely different atmosphere this time around and something, as I said, the Ukrainian people, Ukrainian institutions deserve a lot of credit for.

And what’s also interesting is that there’s a knock-on effect, so the process seems to be a good one, people were relaxed and the process was orderly.

And what we’ve seen through daily tracking online polling by the National Democratic Institute, NDI, that there is a trend line since April 1, in increased trust in the electoral process.  Moreover, that same trend line is increasing for trust in the Central Election Commission to over a majority of those polled.

I think that is so positive for Ukraine’s democratic development that the Ukrainian people have increased trust in their institutions and in the results of the election.

And obviously, we hope that Sunday just continues that positive upward trend.  Because we share in Ukrainians’ high expectations for a good electoral process on Sunday, when I and many others are going to be joining all of you to observe the elections.

I just wanted to say one other thing about the first round, which I think all of us probably said the last time we were here.  What is really important about the first round – this was a contested election, nobody knew who the final two candidates were going to be in the second round.  And I think that’s a positive development – not just for Ukraine, but really for the region.  And so again, it’s a step forward.

Looking forward to after Sunday, Monday and when the CEC certifies the electoral results, I just wanted to state again — as we have stated privately, but also publicly over the last several months — the U.S. government will work with whoever the Ukrainian people elect as president on Sunday.  And we will continue to work on the three things that the Ukrainian people feel are important and that the U.S. feels is important as well:

Ukrainians have been working on this since 1991 independence, they have reinvigorated that process since 2014 and the whole time, the U.S. has been at Ukraine’s side, trying to help facilitate that and we will continue to do so.

So, looking forward to Sunday when all of you are out and about and observing.  I wish you the very best of luck and I just want to thank you again for coming from all over Europe to participate in this important mission.

Thank you very much!