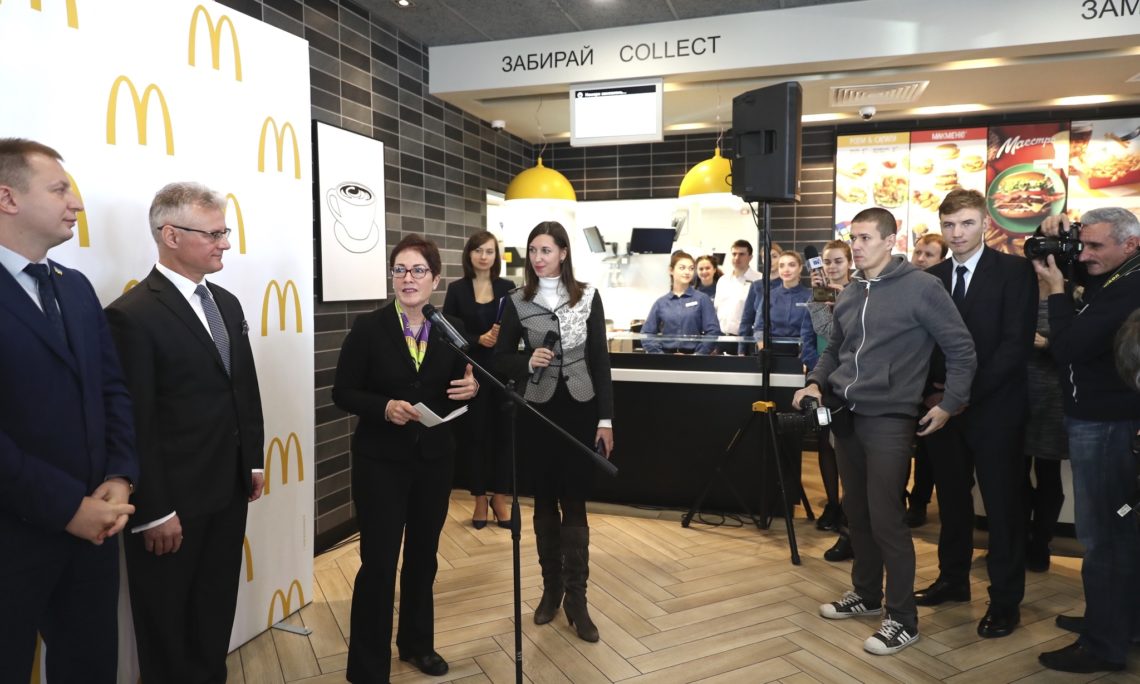 I just want to say congratulations to everybody on a really an auspicious day that we’ve all been waiting for.

And I think I know how everybody feels here, because a long time ago, when I was nine years old, a McDonald’s came near my hometown.  And I remember driving a half an hour with my family to McDonald’s shortly after it opened, and we all got to order a Happy Meal, and it was fabulous!

And I can see that there are already happy customers out there, and I know there are going to be a lot more!

So when Ray Kroc first founded McDonald’s in 1955, the goal was to expand the brand by giving entrepreneurs the opportunity to open franchises around America.

And I don’t think anybody back then would’ve expected that there would be a franchise here in Ternopil ten thousand miles away.

So I think everybody is glad that we’re going to get burgers and fries.  But I think as the Governor and the Mayor know, it’s about much more than this.  It’s about the growing confidence in Ternopil as a place to invest in, a place to do business.

McDonald’s is a flagship American company and they don’t just invest on a whim.  They do research, they make sure that the local economy is strong, that there are going to be businesses that can support them … as well as enough customers to keep the business going.

They also saw that the government in Ternopil — city government, oblast government — is leading the way in social, economic and infrastructure development as a result of Ukraine’s successful decentralization efforts.

That leads to investment, and investment leads to more jobs, therefore more tax revenues, and [this] strengthens regional economic health and stability.

And of course, speaking as the U.S. Ambassador, that investment is all the better when it’s American investment.

And we’ve heard how much McDonald’s has already invested in Ukraine, but also now in Ternopil and the jobs that it brings.

Looking at the bigger picture, I think that both Ternopil and Ukraine have much more potential to succeed even faster.  And how does one do that?  When one improves the business climate.

That means continuing to strengthen the rule of law, easing government regulation, and limiting the influence of entrenched interests.  Making doing business simple, transparent and honest.

So if Ukraine sticks to its reform path, I am very optimistic that it will attract much higher levels of investment, including some excellent American companies.

And I just want to congratulate everybody here again, I know it’s been a lot of work but I think it brings a lot of success and a lot of great meals!