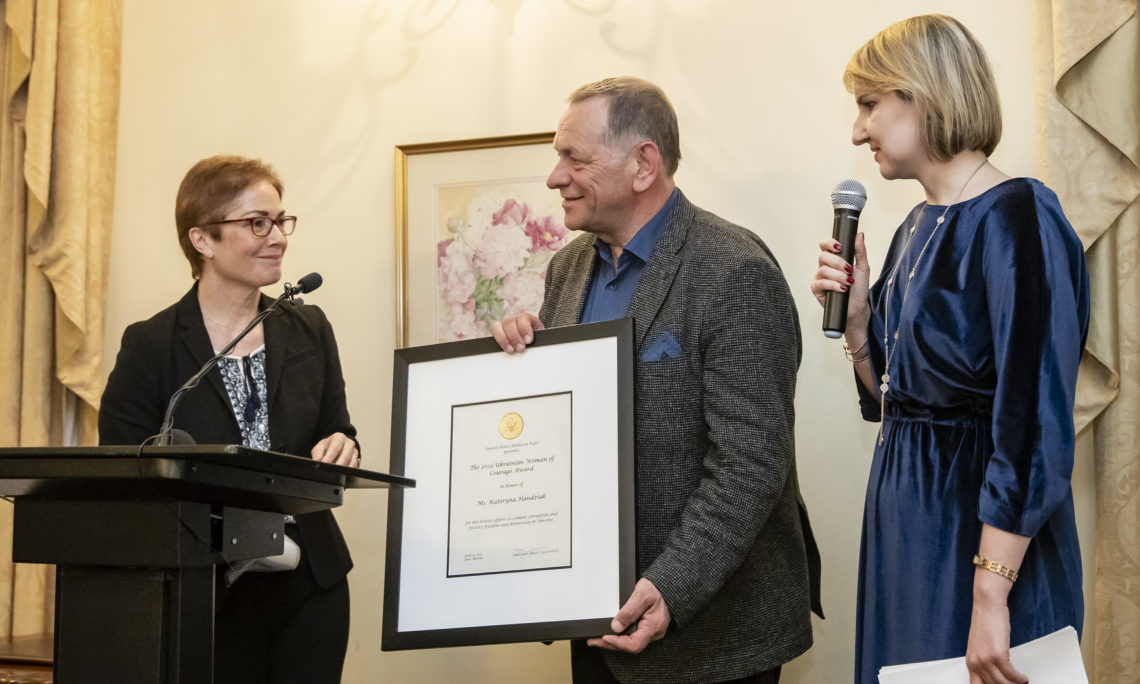 Thank you for joining me tonight to celebrate Ukraine’s women of courage.

Our Embassy here in Kyiv nominated Kateryna Handziuk to be recognized as a Woman of Courage. The Department of State agreed that Kateryna’s courage exemplified the spirit of the award and gave her a special honor during the March 7 ceremony.

Although Kateryna’s father, Victor, and her husband, Serhiy, were not able to attend the Washington ceremony, we are so grateful that Victor could join us tonight. And we salute Serhiy for his valor on the front lines defending Ukraine.

I did not have the honor of knowing Kateryna, but I know from so many of you that she was a woman of courage who committed herself to speaking out against wrongdoing and public waste.

She co-founded the news source Most [Bridge], which has monitored state expenditures and anticorruption investigations.

She courageously highlighted the questionable dealings of officials entrusted with public funds.

And she contributed to UN and other efforts to support Ukrainian children displaced by war.

Tragically, Kateryna paid the ultimate price for her fearlessness in fighting against corruption and for her determined efforts to build a democratic Ukraine.

In the wake of Kateryna’s untimely death, we stand – and I think I speak for all of us – we stand with the Ukrainian people in calling for a thorough investigation and justice for Katya and her family. And we will continue to stand with those engaged in the fight for a democratic Ukraine free of corruption, where people are held accountable.

Ukrainians – both women and men – have demonstrated to the world that they are willing to fight for a better system.

Katya was not only a brave woman. She was also an exemplary representative of Ukraine’s vibrant civil society, which sets this country apart from so many of its neighbors.

It’s important that at this moment of change in Ukraine, that vital partnership is renewed and strengthened.

For our part, the United States will continue working to support equality for all in Ukraine and to further empower women – and men – who bravely lead Ukraine forward towards this country’s Euro-Atlantic future.

I want to ask everyone here today to take some time – in honor of Kateryna Handziuk – to think about how you personally can support Ukrainian men and Ukrainian women of courage as they build Ukraine’s democratic future.

And now, I would like to share with you brief footage from the Women of Courage ceremony that was held in Washington, D.C.

And now I would like to ask Victor Handziuk to come up here and join us.

Because in addition to the ceremony in Washington, we have our own Women of Courage recognition here in Ukraine.

And this year, we are honoring Kateryna as the 2019 Ukrainian Woman of Courage.

So, I would like to give you this plaque in honor of your daughter and the way she has inspired us over the last many years, but especially over the last year.

I would like to ask you to say a few words.

It’s hard to know what to say after such a moving speech.

Because, and I think that what we would all agree is that Katya and her family and the Ukrainian people deserve justice. And we look forward to seeing the day that justice is done.

And we thought there was no one better to speak than Oleksandra Matviychuk, who founded and chairs the Center for Civil Liberties, one of Ukraine’s leading human rights groups.

She also established EuroMaidan SOS to provide injured and arrested Euromaidan protesters with emergency legal assistance. And Oleksandra was our Ukrainian Woman of Courage in 2017.

Please come on up, Oleksandra.

Justice is, I think, what everybody wants. And whether it is politicians, or people in civil society, or those in the police force – I think everyone has a role to play.

So, we wanted to invite Vadim Lisnychuk – who is the Patrol Police Academy Director – to say a few words as he is a leader who works with uniformed women and uniformed men to protect the Ukrainian people.

I think we can all see what a remarkable woman Kateryna Handziuk was, but she continues to inspire all of us to fight for justice.

She was a courageous woman, who wanted to make Ukraine a better place. And she is continuing to do so.

And I’ll just leave you with one thought that was expressed in Washington at the ceremony – that courage is contagious. I think we saw that on the Maidan in 2014, we see that on the front lines every day in the Donbas, we see it in the work that Kateryna Handziuk did here in Ukraine. And we see it in the work of all of you – day in, day out – fighting for Ukraine and the future of Ukraine.

So, I want to thank everybody and I want to just remind you that courage is contagious.

I am sure that Victor Handziuk would love to talk to all of you, so please don’t be shy and introduce yourselves.

And please return to talking to each other and hopefully enjoying the evening, because although I did not know her personally, I think that’s what Kateryna would have wanted.