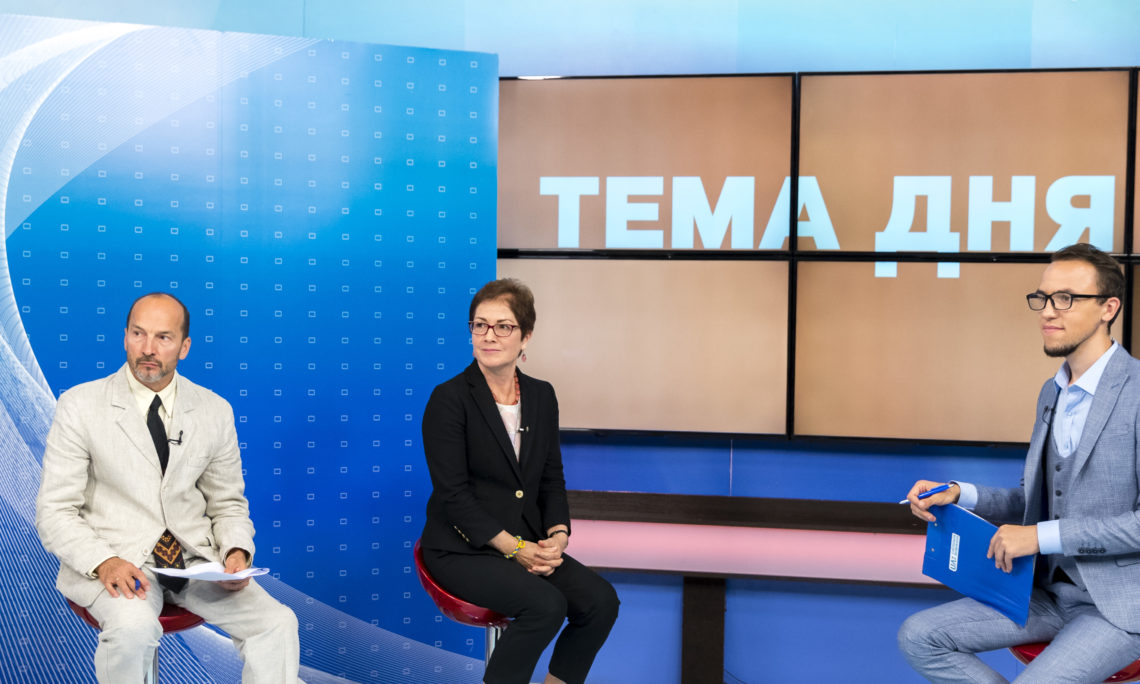 Q: These exercises [Rapid Trident] have been held in Lviv four years, and what is your assessment of the dynamics of this exercise?

Q: And what do Ukrainian military do the best in training – they are the best in?

That’s probably a question for our colleagues in the U.S. military, but here is what I would say: Your soldiers are at war with a very powerful adversary, so they have a lot to teach us about how that is going and what is most effective against it.

Q: In 2014, and now in 2018, we’re holding the biggest number of military exercises; why has the number of such exercises, comparing with the previous couple of years, increased?

I think it just means that our partnership has grown closer, not only with the United States, but with other allied and partnership nations.

Q: Exercise Rapid Trident has been about sharing the best practices and military skills improvement in line with NATO standards, and how does Ukraine manage with its commitment moving forward for the North Atlantic alliance?

No question that Ukraine is becoming a more capable military that is moving forward with reform.

And by reform, what I mean is the reforms that are necessary to make Ukraine a Western style military along the lines with other NATO member militaries.

The recently passed law on national security and defense was a big step forward in that regard and now it’s important, of course, to pass the implementing laws for that and to implement the actual laws.

Q: On August 22nd, speaking at the International Veterans’ Forum in Kyiv, you said that it is important to create a ministry of veteran affairs. Why this step is important and what needs to be done for this?

The United States and Ukraine share something in common, which is that we have a lot of veterans that need assistance.

These veterans have sacrificed and defended their countries, and so it is our obligation to give back.

Because veterans, both in the United States and here in Ukraine, form a sizeable percentage of the population, they have lots that they can contribute and do contribute to society, to the economy, and so making the most of that is really important.

They’ve got great skills, but how do you translate that into a civilian economy — creating job opportunities for people who need them.

Of course, many veterans need other kinds of assistance whether it’s for physical injuries or, you know, injuries of the heart.

Q: If we compare social security for veterans in Ukraine and the United States, what is the biggest difference?

Perhaps not surprisingly, we are, I think, a little bit further advanced in that path, but I also think that the United States still has a ways to go in order to honor our veterans with the kind of support they need as well.

Q: If we are talking about the Ukrainian government, what steps should be taken to improve the conditions of our Ukrainian war veterans?

Well, I think there are number of steps that can be taken, one of the first, as was discussed at the conference on Veterans Day, is to actually establish a ministry as a single point of contact that could provide the sorts of services that we’re talking about, whether it’s on the economic side or whether it’s on the physical, and mental, social assistance side.

Q: Some 250 million dollars of assistance is planned in the U.S. defense budget for Ukraine and the assistance is on the condition that reform in Ukraine continues and succeeds; are you as an international partner satisfied with the implementation of reforms in Ukraine?

I should just make clear to your audience that we have a very complicated budget process and so we’re still in the middle of that budget process for next year.

So, in terms of reforms in Ukraine, I think that from a U.S. point of view we believe that so much has been done to move Ukraine forward and that’s really important to note.

For example, stabilizing the economy in 2014, 2015; banking reform; establishing the patrol police; moving forward with decentralization, that is huge!; and a whole series of reforms that strengthen the Ukraine state against corruption; establishing the independent anticorruption institutions such as NABU, such as the anticorruption court; passing and implementing the law on ProZorro, which is an acquisition… a procurement program for the government that is transparent and computerized; and the list goes on.

Q: You mentioned decentralization reform, there are reforms in health care, so what in your view has been the most successful reform and what has failed and why?

I think right now; I would say that decentralization is perhaps one of the most successful reforms. The government has — and by that I mean the Rada, Bankova, the Cabinet, Prime Minister — have been able to move legislation forward and budgets forward to move decisions and budgets to the local level.

And why is that important? Because at the local level, mayors working with their town councils, but also with the citizens of their townships, are making decisions that best meet the needs of their citizens.

I mean, I think people at the local level know best where to put city lamps, or city lights, on which streets, or whether this road or that road should be paved first, what needs to be done in the school. When decisions are all pushed up to a central authority, it takes a lot longer and maybe the right decision isn’t going to be made.

In our view in the U.S., the goal of government is to provide services to the people.  We work for the people in government and I think that’s starting to happen with decentralization at the local level.

Q: What is your opinion about reforming of state run television into public broadcasting?

I think it’s really important, we have this in the United States as well, and I think that, you know, the citizens of the country need an objective, independent voice … access to the news and what is happening.

Q: Also, during your visit you participated in one of the border projects – improving security of borders; what is this project about?

Well, it’s called New Face of the Ukrainian Border, and two years ago we partnered with the border guards to help them conceive of a project that would increase efficiency, improve security, and lower corruption.

And likewise, improve customer service, so there is that friendly face either when a tourist comes to Ukraine or when a Ukrainian citizen, such as yourself, returns to Ukraine; that there’s somebody who is friendly, and polite, and professional at the border to greet you and make sure that your business is lawful and to speed you on your way.

So there was a small pilot project and then it was rolled out in Borispyl and here in Krakovets and we’re hoping to expand it to eight more locations as well.

I’m not sure one could actually make that kind of distinction, I think they’re — all border crossing points, all borders, are important. Perhaps for different reasons. I also think about Odesa, as an enormous sea port, and really one of the most important arteries for Ukraine’s commerce.

So, obviously, one has to prioritize, because one can’t do everything at once, and so two areas were selected, but I think, that does not mean others are less important.

Q: What is your opinion about the military conflict that is taking place here in Ukraine now?

Well, you know, clearly, this is a war that should never have been started and we support Ukraine’s sovereignty and territorial integrity.

The brave soldiers that we saw this morning at Rapid Trident out in Yavoriv are defending Ukraine in that war as other compatriots and I think they’re doing an excellent job.

And one of the things I think is important not just for Ukrainians but for the world to remember is that this is a hot war; there are individuals, both with military and civilian, who die every week in this war, and it has to come to an end.

I think what we see here in Ukraine is a partner country that has come under attack from a powerful adversary that we share.

It cannot be that in 2018, borders can just be changed, because a powerful country wants to change the border. That would create a world that is less safe for everyone.

So that is why we support Ukraine, whether it is through our security assistance, training, and equipment assistance, strengthening Ukraine internally through things like decentralization that empower local communities, helping, you know, the media … whether it’s through helping to establish public television, or, you know, training journalists and others, training citizens on media literacy, it’s important that Ukrainians have access to good, solid, fact-based information in order to make the right decisions for their country.

So, we’re proud to partner with Ukraine and Ukrainian citizens on those kinds of projects, as well as many others.

Because we believe it’s in Ukraine’s interest, but also in our own. Because Ukraine would be a strong and democratic partner for the U.S.