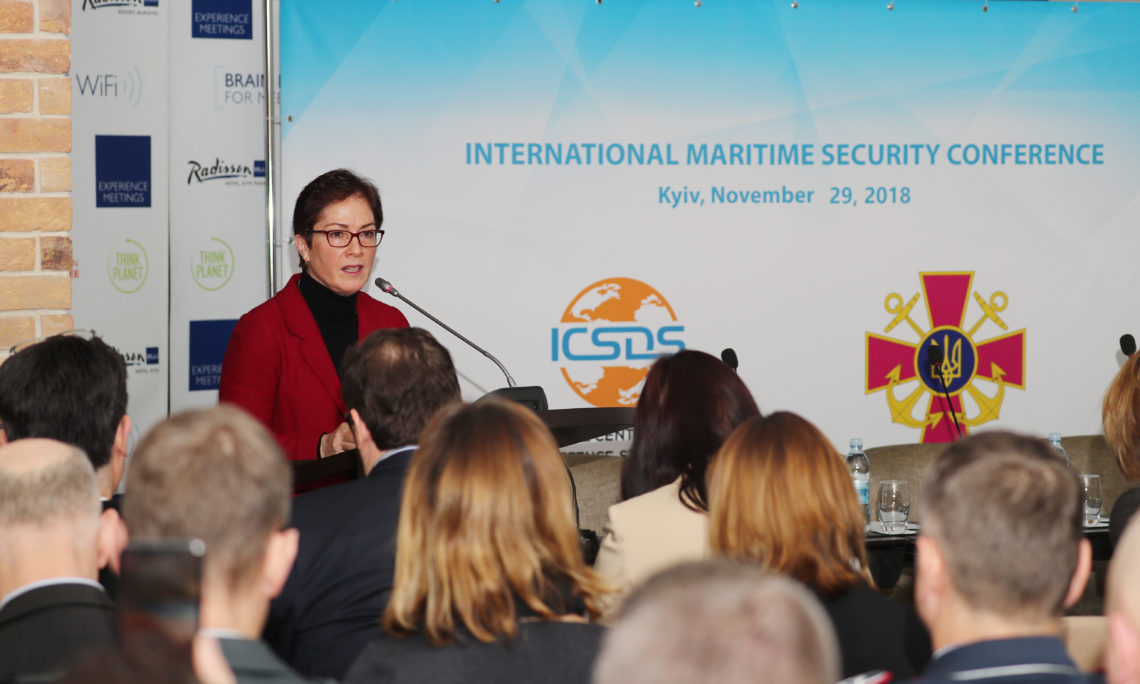 I want to thank you for inviting me here today and I want to thank the organizers for hosting this conference at what turns out to be a very critical moment.

The events of November 25th lend an added sense of urgency to Ukraine’s Naval Strategy. They remind us that formulating strategy is not just an academic exercise, but an exercise with vital real-world consequences.

For almost five years, Russia has fomented a war that has had more than 10,000 casualties; it has dialed up and down the violence to suit its own domestic political purposes.

It has supplemented its military campaign with a variety of hybrid measures designed to destabilize Ukraine’s economy, society, telecommunications, and government.

All the while, it has tried to maintain the false pretense of being somehow uninvolved in this conflict.

On Sunday, Russia crossed a threshold. Skeptics, naysayers, and Russian officials can no longer deny what we’ve long known: the strings controlling the puppets in this conflict – whether they are “little green men” or so-called separatists – can be traced straight back Moscow.

In fact, Moscow has admitted its actions, and the first openly Russian-flagged attack against Ukrainian-flagged forces also brought the violence from the land to the sea.

This attack represents a dangerous escalation and is part of a pattern of Russian malign activities.

In the aftermath, Russia predictably turned to its disinformation handbook: Russian officials provided over a dozen differing accounts of the events to confuse the public, the media, and foreign officials.

Let there be no confusion. The facts are clear:

The attack and seizure were gross violations of international law, as was the pursuit by Russian ships through Ukrainian territorial waters off Crimea, an integral part of Ukraine’s sovereign territory.

We call on Russia to de-escalate the tension that Russia has created, to return to Ukraine the detained crew members and its vessels, and to respect Ukraine’s sovereignty and territorial integrity within its internationally recognized borders, extending to its territorial waters.

Protecting freedom of navigation against Russian threats is paramount to protecting Ukraine’s economy and its people, as well as security and stability of the Black Sea region.

In this regard, Ukraine’s naval strategy is a major accomplishment. It is more than just a document: it represents a decision and a commitment to protect Ukraine’s sovereignty and territorial integrity.

The United States supports Ukraine’s right to do so, and we will continue to stand with the people of Ukraine against Russian aggression.

And our support is not just verbal. I could run through a long list, which I promise not to do, of the kinds of support that we have offered the Ukrainian Navy over the last several years.

We are — as I think many people know, we discussed this last year at this Naval conference — we are soon to deliver the two Island-class cutters; we are embarked on a multi-phase project with the Ukrainians to provide radar systems; the infrastructure that Admiral Voronchenko was talking about at several Ukrainian Naval sites we’re helping with; the Sea Breeze Naval Exercise, now in its eighteenth year; and of course, a forward naval presence in the Black Sea coordinated with NATO, it comes to about 250 days annually of U.S. or NATO presence in the Black Sea. And of course, we are proud to have also provided some assistance in developing the naval strategy that is featured and announced at this conference.

These steps and others I think demonstrate the seriousness of our commitment and we are currently considering additional ways the United States might assist Ukraine to further develop its maritime capacity.

But in the heat of what can only be described as a crisis, we must also remember:

Military conflicts, as the United States knows all too well, and as Ukraine does as well, are often defining moments for a nation.

Russia’s actions were gross violations of international norms and justice.

And in the face of that challenge, Ukraine must chart a course it will be proud to bequeath to future generations; to chart a course that exemplifies the Euro-Atlantic ideals Ukraine aspires to.

I don’t need to tell anybody in this room that Ukraine took a grave decision in promulgating martial law.

It is important that Ukraine continue to protect its democracy, civil liberties, and the spirit of the Revolution of Dignity.

And it is important that Ukraine limit the use of these authorities only to what is absolutely necessary to counter clear Russian threats.

On November 25th, Ukraine’s sailors were defending Ukraine’s sovereignty and the right of all Ukrainians to be free in their own territory.

They extended to the maritime domain Ukraine’s defense of the principles of freedom, sovereignty, and dignity that animated the Revolution of Dignity.

So here is my hope for Ukraine, that the wise heads and the brave hearts at Ukraine’s helm hew closely to the course charted by the heroes on the Maidan, many of whom are here today, and continued by the heroes of the Black Sea.

Ukraine’s sailors in captivity, its free citizens, and its sons and daughters of tomorrow deserve no less.