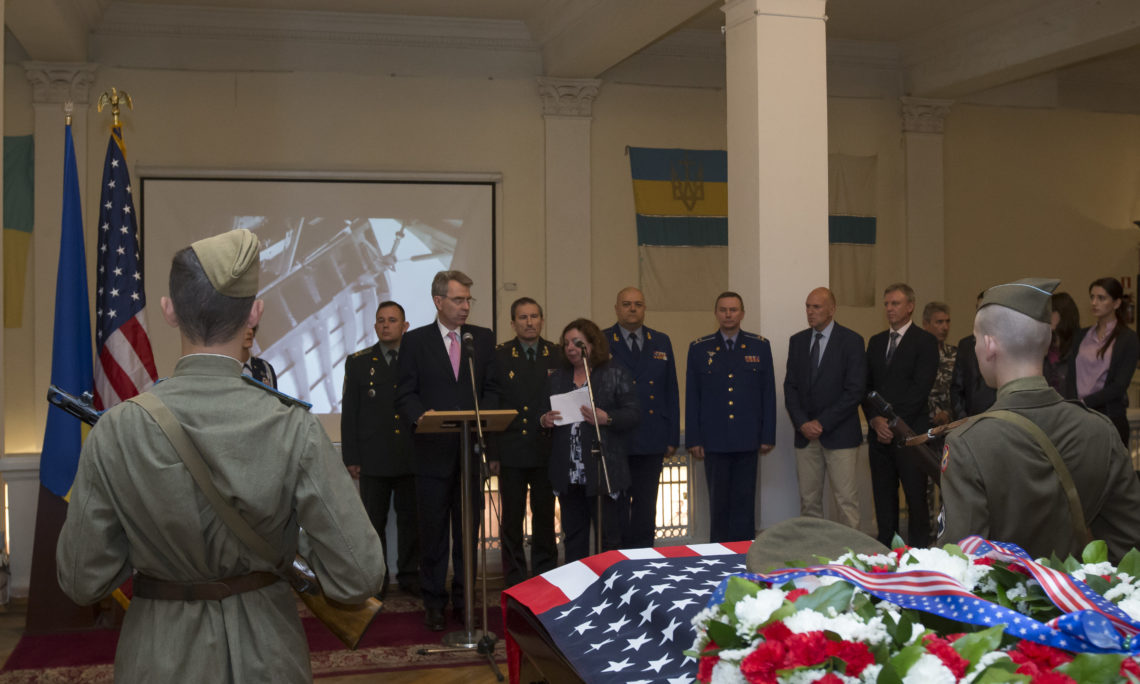 August 12, 2016. On August 12, 2016, U.S. Ambassador Geoffrey Pyatt spoke at a ceremony at the National Military History Museum in Kyiv commemorating the repatriation of remains from Ukraine to United States custody.  The U.S. Army Second Lieutenant was shot down near Novi Troyany, Odesa Oblast in June, 1944 during Operation Frantic—a series of shuttle bombing operations against Germany during World War II conducted by American aircraft based in Britain and southern Italy which then landed at three airfields in Ukraine.  The identity of the Second Lieutenant is being withheld until positive identification is confirmed.“

I would like to thank the Ministry of Defense and General Staff and everyone in the Government of Ukraine who has made today’s repatriation possible…Over 70 years ago, this young American pilot was killed while fighting a war on Ukrainian soil that was marked by brutal conflict with an aggressive foe challenging our most fundamental values.  Based in Poltava, these American pilots represented what we call our greatest generation.  We have never forgotten these heroes and their sacrifice for the United States and for the values we jointly espouse.  I know Ukrainians share the same feelings towards your soldiers defending Ukraine’s future today in the ATO,” said Ambassador Pyatt, after the U.S. and Ukrainian national anthems were played and Ukrainian Deputy Chief of General Staff Sirotenko delivered remarks.

The United States Defense POW/MIA Accounting Agency’s (DPAA) mission is to provide the fullest possible accounting for missing personnel to their families and the nation.  Through DPAA, the United States strives to give POW/MIA families what solace and answers can be provided by information about their loved ones’ service and ultimately their sacrifice. We continue to do whatever possible to bring these unaccounted-for Americans home.