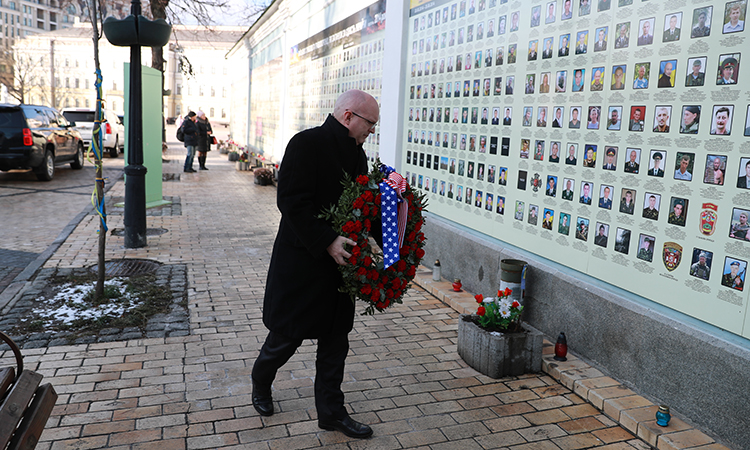 During his official visit to Ukraine on December 3-4, Acting Assistant Secretary of State for European and Eurasian Affairs Philip T. Reeker held productive discussions with Ukrainian government officials, National Bank of Ukraine officials, and representatives of civil society.  On behalf of the American people, Ambassador Reeker visited the Memorial to the Fallen in Defense of Ukraine to place flowers to honor the over 13,000 Ukrainians killed to date in eastern Ukraine as a consequence of Russia’s aggression.

“As the December 9 Normandy format summit approaches, Secretary Pompeo asked me to meet with our Ukrainian partners, to highlight the Administration’s steadfast support for a democratic, secure, and prosperous Ukraine,” Reeker said.  “Ukraine’s success, in the face of Russia’s unacceptable and illegal aggression, matters deeply to the United States, and to all those around the world who stand for democratic values.”

During his meetings, Ambassador Reeker congratulated Ukrainian officials on the challenging but important progress they have made, under President Zelenskyy’s leadership, toward peace.

“The United States stands firmly with Ukraine and supports President Zelenskyy’s efforts to achieve a resolution to the Russia-initiated conflict in eastern Ukraine that would fully restore Ukraine’s sovereignty within its internationally recognized borders, including Crimea, the Donbas, and Ukraine’s territorial waters,” Reeker said.

Ambassador Reeker also underscored the importance of the reform efforts that Ukraine is undertaking.  “In my meetings I saw firsthand Ukraine’s genuine, vibrant democracy in action.  The efforts Ukraine is making on reforms – in the defense, economic, and judicial sectors, and beyond – set a strong example for other countries.  Much work remains – including the challenge of overcoming Ukraine’s oligarchic legacy – but the steps Ukraine is taking are laying the groundwork for stronger economic ties with the United States and other Western partners.”

Ambassador Reeker departed from Kyiv to travel to Bratislava to represent Secretary Pompeo at the OSCE Ministerial.