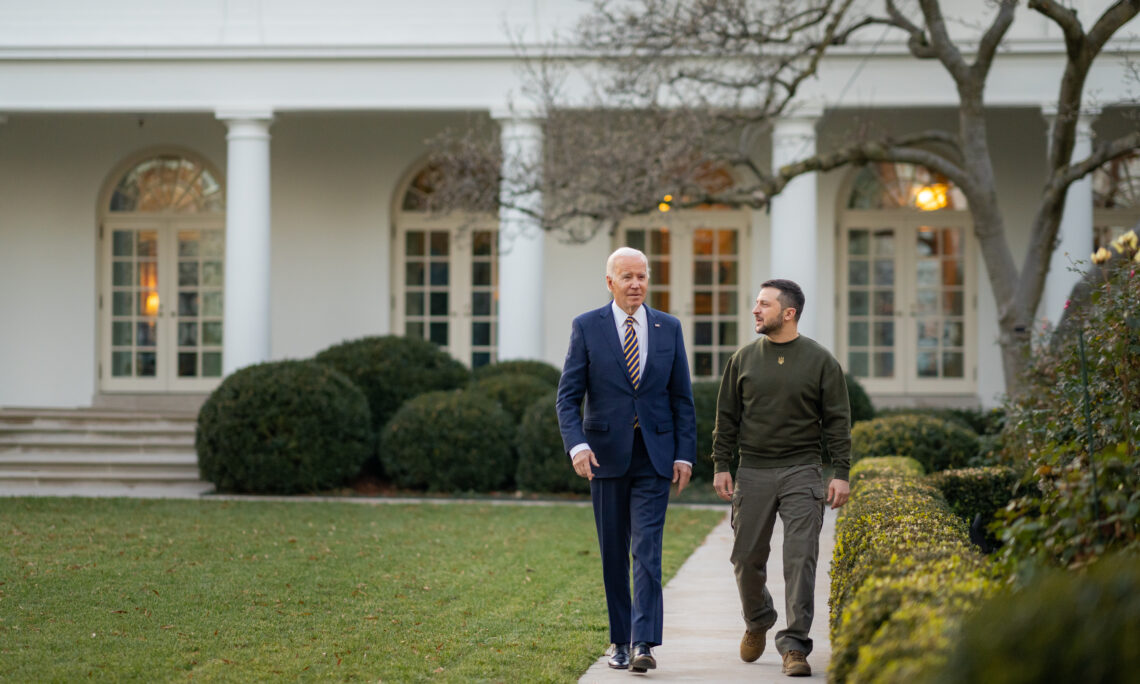 When President Zelenskyy traveled to Washington on December 21 to meet President Biden and to address a joint session of Congress, his secret trip recalled another wartime leader from a nation under bombardment on a mission to the United States: Winston Churchill’s daring travel to see President Roosevelt and speak to Congress in 1941. In both cases, the principles of liberty, democracy, territorial integrity, and national sovereignty were at stake. In both cases, America responded as a nation of people who prize freedom and who rise to support those defending it.

I could not be prouder to be President Biden’s representative in Kyiv at this moment. I believe history will mark President Zelenskyy’s wartime trip to Washington as a critical moment in Ukraine’s fight to defend its freedom and its democracy against the Kremlin’s barbaric aggression.

During President Zelenskyy’s December 21 visit, President Biden announced another $1.85 billion in security assistance, including the transfer of a battery of PATRIOTs, the world’s pre-eminent air defense system. Providing the PATRIOT to Ukraine not only helps protect those under Ukrainian skies, but it also sends a powerful signal of the steadfast U.S. commitment to Ukraine’s future. Under President Biden’s leadership, the United States will continue to spearhead the global effort to strengthen Ukraine’s ability to defend itself and deter future attacks by the Russian Federation.

President Zelenskyy’s visit was important for another reason: it demonstrated the strong, bipartisan support Ukraine has in the U.S. Congress. Following his speech to a joint session of both chambers, Congress passed, and President Biden signed, a spending bill that committed another nearly $45 billion in aid to Ukraine and our Allies and partners. Supporting Europe “whole, free, and at peace” has been a decades-long, bipartisan goal of the United States.

Russia has different goals. Since October 10, Russia has launched hundreds of missiles and drones against critical infrastructure in Ukraine, in an apparent attempt to take out the light, heat, and power for millions of Ukrainians – essentially to freeze you and your families in the middle of winter. This effort – and this brutal war – will be a strategic failure for Russia.

I know it will be a failure because of how powerfully the people of Ukraine have demanded and fought for your future. We saw this when you loudly and clearly declared your independence in 1991, when 92% of the country chose to become a sovereign nation in a national referendum.

We saw it again when you re-asserted your freedom and your rights as citizens during the Orange Revolution in 2004 and during the Revolution of Dignity in 2014, unequivocally choosing a closer relationship with Europe and its democratic values. No number of Russian bombs or Iranian-provided drones is going to change this.

Whenever I return to the United States, I am struck by how often I see the Ukrainian flag flying on American homes. Ukraine has won a place in the hearts of my fellow citizens, in all states, from the Atlantic to the Pacific. It is because we believe in freedom, and we too know the value and the cost.

As President Biden has said time and again, the United States stands with Ukraine, and we will be with you for as long as it takes. And as a new year dawns, we know that light will conquer darkness.